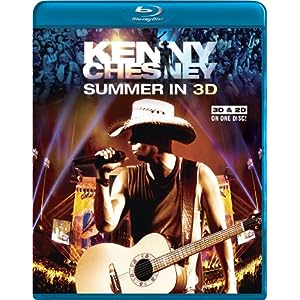 Beyond the unparalleled performances filmed over 6 nights, captured from onstage, the front row, the wings and even the Goodyear blimp, this film includes extensive archival footage, behind-the-scenes moments and photographs held together by Chesneys own narrative, taking people inside the life, the love, and the reasons for his unprecedented success. This spectacular release contains 4 bonus songs not seen in theaters. *Please note this Blu-ray contains both the 3D version and the 2D version of the concert film and will play on a standard Blu-ray player.

Country music superstar Kenny Chesney launched his Sun City Carnival concert tour in April 2009 and kept the party going across America until November 2009. Concert footage includes shows in Pittsburgh, Indianapolis, Philadelphia and Seattle. State-of-the-art, 3-D camera systems and up-close access to the performers, on stage and backstage, provide fans with full exposure to all aspects of the concert tour experience.

Chesney performs an unbelievable twenty-three songs in a minute shy of one hundred minutes singing big Country jams and solemn, emotional songs. “Big Star”, “Young”, “Live Those Songs”, “Down the Road”, “Keg in the Closet”, and my personal favorite “When the Sun Goes Down” are the hits of the concert. Sadly, Uncle Kracker does not team up with Kenny in “When the Sun Goes Down” giving his raspy vocals and nice feel to the track so his line that can only be said by him is replaced with the “Everything gets hotter when the sun goes down” lyric.

The Blu-Ray comes with the full concert and some bonus tracks in 2D and 3D. Some of you might want additional special features, but you have to remember that this disc is being maxed out to present the concert in HD, 3D HD and alternating patterns. The DTS-HD 5.1 and uncompressed PCM audio are almost identical, as they offer up to the best audio experience outside of being at the concert. That being said, you still have to be a fan of the music to enjoy it. In the end, I’d recommend a purchase to all country fans.