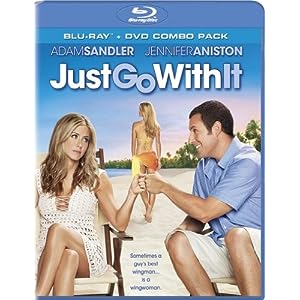 On a weekend trip to Hawaii, a plastic surgeon convinces his loyal assistant to pose as his soon-to-be-divorced wife in order to cover up a careless lie he told to his much-younger girlfriend.

On his sixth collaboration with director Dennis Dugan, Sandler stars as Danny, a guy who was once hurt by his fiancé. When at a bar, he meets this girl who sees his wedding ring. This prompts him to make up a story of how he has a horrible wife. Since then, he has used that story on many girls and having dozens of no strings attached relations with many girls.

At a party, Sandler meets a girl named Palmer (Brooklyn Decker). Yes, she has very good looks and does a great job with this role showing that she has more than a pretty face and attractive body. After meeting and talking with her, Danny thinks that Palmer may be the one. However, she finds the ring and wants nothing to do with him, until he convinces her that he is getting divorced.

One of the many major flaws of  ‘Just Go With It’  is the script. The romance between Katherine and Danny felt rushed as did the entire ending. Brooklyn Decker looks hot and isn’t a bad actress for a hot newcomer even though, in terms of hotness, she has tough competition in the form of Jennifer Aniston who doesn’t shy away from showing her amazing curves.

It actually became frustrating watching her observe these clearly fake performances and outlandish accents and cover stories and seemingly buy it all for a good portion of the film. Palmer is supposed to be a smart, competent school teacher yet she was as gullible as a 5 year old and lacked the common sense of an 8 year old. Just too much…way too much and can I just say that the character of Eddie was so unfunny that it was uncomfortable to watch? I usually love Swardson in movies but the whole character was horrible.

Overall, the movie had some funny moments but the lies became so extreme and so excessive that it became ridiculous and just plain stupid by the half way point. It was unrealistic that Palmer would buy the lies and the formulaic boy/girl rom com script only hurt the film. Nicole Kidman plays Devlin, a mean girl sorority sister of Katherine’s from the past who Katherine in present day still greatly resents. Of course Devlin just so happens to also be vacationing in Hawaii and runs into Katherine who then, wanting to make a good impression concocts the lie that Danny, the plastic surgeon, is her husband which creates a new set of shenanigans.

The Blu-Ray comes with deleted scenes, featurettes, and a ton of Blu-Ray exclusives. The highlights of those special additions being more time spent with Kevin Nealon’s Plastic Man. The A/V Quality is reference quality with a 1080p transfer that shows no sign of print damage or dirt. The DTS-HD 5.1 master audio track doesn’t get a lot of room to really show off, but it is a strong mix that makes all of the Hawaiian adventure come to life. I’d recommend a rental for non-Sandler fans. Others should purchase it.

0 0
Previous ArticleLEGENDS OF FLIGHTNext ArticleSECRET LIFE OF THE AMERICAN TEENAGER, THE: VOLUME SIX