Shout! Factory will Journey To Space for its first foray into a line of new, immersive, Giant Screen films in the visually stunning 4K Ultra HD™ format. The film will be released June 7, 2016, on Blu-ray, and in a 4K UHD + 3D Blu-ray + Blu-ray 2-disc combo, and both releases will include trailers, a photo gallery, and behind-the-scenes footage as bonus features.

This dazzling film illustrates just how exciting and ambitious NASA’s next era promises to be. In showcasing the goals NASA and the space industry are working towards, including space travel to Mars and capturing asteroids, the film puts an end to the perception that the space program died with the end of the Space Shuttle Program.

Beautifully narrated by film and television legend Sir Patrick Stewart, and featuring extensive interviews with astronauts Chris Ferguson (Commander of the final shuttle mission) and Serena Aunon (a new astronaut chosen for future flights), Journey To Space also puts into historical context the magnificent contributions made by the Space Shuttle program and its daring space pioneers during their 135 missions.

Journey To Space offers spectacular space footage and gorgeous views of Earth as it shows operations in space, such as deploying and repairing the Hubble Space Telescope, and building the International Space Station (ISS). These incredibly important programs taught us how to live, build and conduct science in space. The ISS will continue to be in operation until 2024, and the film shows how it is building a foundation for the next giant leaps NASA will be taking, leaps that will forever change how we live

and operate in space as a species. An impressive and realistic depiction of how astronauts plan to travel to Mars and back as part of a two-and-a-half-year mission concludes this sensational film.

The spirit of human exploration is at the core of man’s DNA. Journey To Space endeavors to remind us all of the incredible accomplishments the brave men and women of the Space Shuttle program have achieved so far, and to inspire younger generations to dream of new horizons in space.

Currently playing in select theaters, Journey To Space is available for pre-order now on amazon.com and shoutfactory.com.

These releases are produced in conjunction with Ryan Mullins at Big Picture Digital Productions. 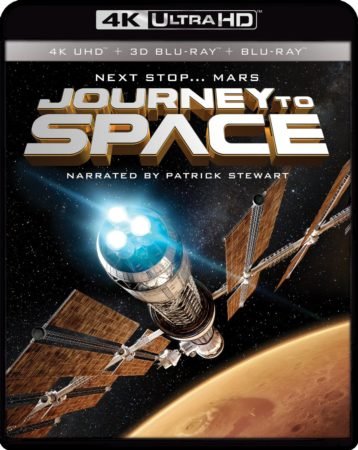