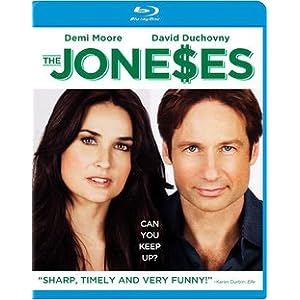 A seemingly perfect family moves into a suburban neighborhood, but when it comes to the truth as to why they’re living there, they don’t exactly come clean with their neighbors.

Steve Jones spends his time mowing the lawn and playing golf and you wonder how and how much dough and bacon he brings home. Kate Jones occupies her time with all things necessary to look hot and beautiful, Jenn Jones being the beautiful teenage daughter who’s the flower of the school, and Mick Jones the geeky but popular boy whose toys and gadgets make him the go to guy. Recently moving into a new neighbourhood, the Jones family soon become the envy of their neighbours, with everyone lapping up what they drive, drink, wear and have. If you want to be with the cool crowd, then you need to well, keep up with the Joneses.

Until of course the facade is pulled back, and we realize that it’s all about in-your-face yet sublime piece of advertising, where product placement both in the reel, and don’t forget the real world, are pretty much featured everywhere, allowing you to make mental note to get that golf club, or that Audi sports car if you have the dough. It’s about the selling of a concept lifestyle, and this form of getting the word out, through actual talking about, and sampling the product, is nothing but a real world kind of inception, with the planting of mindshare firmly in the minds of the masses.

The movie keeps a light tone as it is devoid of an “us v them” feel of the modern allegory. It is more wryly structured as “us v us.” Ironically, the message of the movie is most applicable to the deluge of viral marketing devaluing the internet as an information source. The sales method in the Joneses is identical to the way entertainment is marketed on the net currently. Will coin the term here “virola,”  to describe the obnoxious phenomenon. Movies like the Joneses memorialize what is going on without stepping on too many toes, a great way to inoculate, entertain and save the internet just a bit at the same time.

The Blu-Ray comes with some deleted scenes. There’s nothing in those extra minutes that really takes the film to that next level. The A/V Quality is pretty strong with a solid DTS-HD master audio track and a flawless transfer. But, I’d recommend a rental before buying. A lot of people missed this flick during its initial theatrical run, but the kicker is that the film might be a little off-putting to some. Rent before making a decision about buying.