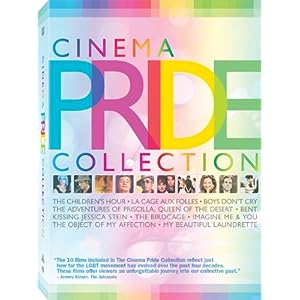 A newlywed bride becomes infatuated with another woman, who questions her sexual orientation, promoting a stir among the bride’s family and friends.

“Imagine Me & You” is not your typical love story. It is the story of a girl named Rachel (Piper Perabo) who is getting married to her long term fiancée Heck (Matthew Goode). At the wedding ceremony, Rachel locks eyes with the flower girl Luce (Lena Headey) and feels something that she has never felt before. After the wedding, Rachel invites Luce over for some dinner to thank her for such a wonderful flower arrangement and to help set up Heck’s friend Coop (Darren Boyd) with Luce. Before dinner, Heck asks Luce if she has a husband or a boyfriend but to Heck’s surprise he finds out that she has neither and is indeed attracted to members of the same sex. Heck shocked by the news, alerts Rachel. But Rachel seems to be uninterested in the news and just wants to know why she is so drawn to Luce. Funny and touching moments ensue

I was lucky enough to be invited to a free screening for this film. This is definitely a film I would have been happy to pay for. This movie is often funny but is never over the top. “Imagine Me & You” is definitely a breathe of fresh air when it comes to the whole romantic comedy genre. I think the whole new spin with homosexual love stories is helping this genre and allowing some fresh new material to be used. I first saw Piper Perabo in the movie “Lost & Delirious” which is a wonderful and beautifully told tale. After seeing that movie, I was blown away by her performance. But soon after she wasn’t in much and kind of started to do bad mainstream movies like “The Cave” but now with “Imagine Me & You” I can say that she’s back to where she belongs. Piper plays Rachel like the role was tailor made for her. Her performance is touching and believable. Matthew Goode also stars as the lovable and sensible husband. Again I liked Matthew Goode from the first time I saw him in “Chasing Liberty”. Goode has definitely come a long way from “Chasing Liberty” and has proved himself to be a worthy addition to Hollywood as an actor.

The DVD comes with a couple of featurettes and a commentary from the writer/director. If that wasn’t enough, you also get some deleted scenes. The A/V Quality is pretty impressive for an indie, but it’s the same transfer as the past release. If you already own it, I wouldn’t recommend rebuying. Still, it’s an impressive film that’s already part of the larger Cinema Pride Collection.