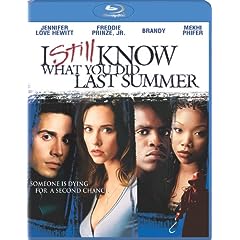 The murderous fisherman with a hook is back to once again stalk the two surviving teens, Julie and Ray, who left him for dead, as well as cause even more murder and mayhem, this time at a posh island resort.

Jennifer Love Hewitt is a very good-looking young leading lady; however, unlike Neve Campbell, Hewitt struggles with acting. She just isn’t convincing in this film (and she wasn’t in the original either). This puts many young males, including myself, in a paradoxical quandary: she’s very attractive, but the annoying, spoiled, Valley Girl-type character she tries to play here is annoying to the extreme and ruins many of the scenes which emphasize, exploitatively, her figure. Add to the mix the equally pleasant yet irritating Brandy, another rising teen TV star, and you get one frustrated male audience.

I’ve spent so much time on Hewitt and Brandy for a reason. I Still Know What You Did Last Summer, though cashing in on the success of the original, ultimately serves as a vehicle for these two young actresses. Nothing else here is original or interesting. This movie, in fact, makes other recent so-so horror films like Urban Legend and John Carpenter’s Vampires seem like stunning works of high art. I Still Know relies heavily on tired slasher film cliches: an isolated location, a storm, parentless teenagers, false alarm nightmares, lots of blue-lighted darkness scenes, a garbed slasher who walks around in the background without the characters seeing him, knives and other sharp instruments lying around everywhere, etc. You get the picture. The entire audience knows all the secondary characters introduced in the film are going to receive the business end of the killer’s hook. They may as well have huge targets painted on them. Like Scream and its numerous knockoffs, these I Still Know‘s characters aren’t all that funny. In particular, one character, a chain-weed-smoking guy, is obnoxiously annoying and certainly doesn’t die soon enough. The death scenes, by the way, are relatively violent for a theatrically released horror film. Several of them are uncomfortable to watch, and they reminded me of the sickening gore scenes in Hellraiser: Bloodline, a truly sadistic movie. This, too, did not help the supposed humor I Still Know was shooting for.

And what is the deal with the slasher himself? I know that the slasher film is not a particularly intelligent genre, but Ben Willis has got to go down as one of the most silly slashers in mainstream horror. Come on, the guy looks like the Gorton’s fisherman, and his gruff voice makes him sound like a Disney pirate. Though his lightning-lit appearances ellicited much-needed laughter in the theater, his appearance borders on the absurd in the horror film, and that’s *really* saying something.

So, all that’s left to talk about here is Jennifer Love Hewitt and Brandy. Both prance about in tightfitting, revealing outfits or in various states of undress, yet neither of them ever actually do a nude scene. Hewitt, however, does do a post-shower scene in which her thin bathrobe is quite… titillating. This scene alone made this one-star turkey earn two stars under my rating system. Otherwise, Hewitt and Brandy both grate on the nerves. Early in the film, for instance, Brandy wins the trip to the Bahamas. She and Hewitt jump around and scream and screech for what seems like forever. I needed extra-strength Tylenol after that part. Oh, and the film’s conclusion, talk about repetitive! People who saw I Know What You Did Last Summer will predict I Still Know‘s ending at least 5 minutes before it happens.
The Blu-Ray is such a weird beast. You only get a handful of special features such as a Jennifer Love Hewitt music video, a trailer and a featurette about the making of the film. But, the BD-Live enabling is supposed to make that all worthwhile. It’s nice to have an older film on Blu-Ray. But, I expect a little more than adequate A/V Quality. However, I’d recommend it for a rental.
RELEASE DATE: 07/14/09