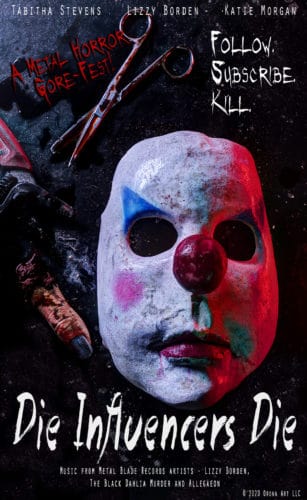 The Die Influencers Die soundtrack features some of the biggest names in heavy metal music from Metal Blade Records including Lizzy Borden, The Black Dahlia Murder and Allegaeon.

Die Influencers Die premieres in August 2020 on Vimeo On Demand in a Special Pre-Release, with exclusive uncut behind the scenes bonus footage followed by a general worldwide streaming release on TVOD platforms in September 2020, and it hits SVOD streaming platforms worldwide fourth quarter of 2020.

Watch the trailer of Die Influencers Die at DieInfluencersDie.com

The Special Sneak Pre-Release Version is available at DieInfluencersDie.com