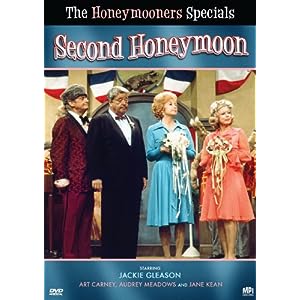 The Honeymooners Return For Their Final Series Of Long-Lost Specials- In Color! In 1976, Jackie Gleason, Audrey Meadows, Art Carney and Jane Kean reunited for the first of four hour-long specials representing the final performances of their classic Honeymooners characters.

On the Kramden s 25th wedding anniversary, Ralph plans to remarry Alice in a special ceremony at the Raccoon lodge. However, the festivities become overshadowed when Ralph believes Alice is pregnant and old pal Ed Norton begins to teach him how to take care of a baby.

Audrey Meadows wasn’t the original Alice Kramden, but she’s the one whom Honeymooners fans remember, thanks to those ‘famous 39’ episodes which have been in constant syndication since their original broadcast. Here, she returns to her role. Alice’s mother is staying with the Kramdens for a few days, so of course Ralph is in a foul mood. Also, Ralph has to sleep in the kitchen so that Alice and her mother can share the bedroom.

Due to some incredibly contrived circumstances, Ralph thinks that Alice is pregnant! This could have been the premise for a classic ‘Honeymooners’ episode back in 1956, but twenty years on with Gleason and Meadows both well past middle age….it somehow doesn’t feel the same. And too many of the jokes here are painfully obvious.

The DVD comes with a rare Honeymooners skit from 1967 that feature Ray Bolger. That was quite odd to see the Tin Woodsman as one of the Honeymooners. But, my main beef is with the A/V Quality. I know that it’s an older broadcast, but try to clean up the video next time. Oh well, it’s still a rental.