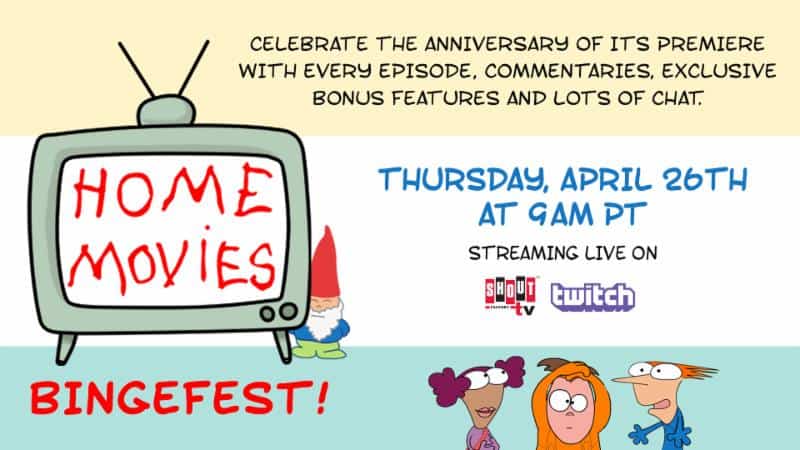 Why wait for the 20th anniversary if you can celebrate Franz Kafka, drunken soccer coaches and life through a fisheye lens now? Shout! Factory TV will partner with social video platform Twitch to host a 3-day marathon of the cult hit series Home Movies from April 26-28 in celebration of the 19th anniversary of the show’s premiere. Fans can watch all 52 episodes from the original four-season run, complete with a full day of bonus content, including interviews with series creators Loren Bouchard (Bob’s Burgers) and Brendon Small (Metalocalypse) and episode commentaries with cast, crew and special guests. The marathon begins Thursday, April 26 at 9 a.m. PT on Shout! Factory’s official Twitch channel.

“It feels nice to know that 20 years after we made the pilot that folks still feel strongly about Home Movies,” said Brendon Small. “When I think about those days I think about how effortless and fun it was writing, improvising, and making music for Home Movies. And what a talented team of funny collaborators!”

Home Movies is the irreverent animated comedy television series that chronicles the life of pint-sized, aspiring filmmaker, Brendon Small. Brendon, a jaded third grader, uses his video camera to cope with the trials of his eight-year-old life.

This cult hit show spotlights Brendon writing, acting, directing and co-executive producing his “groundbreaking early work” along with his friends Melissa and Jason. The show also features Coach McGuirk, a youth soccer coach who hates soccer and isn’t all that crazy about youths. He’s a binge drinker, a big talker and, as far as he’s concerned, a perfect male role model for Brendon.

With fresh, insightful wit and a terrific voice cast (including Small, H. Jon Benjamin, Melissa Galsky and Janine Ditullio) Home Movies was an early [adult swim] success story, and remains a hilariously animated sitcom for the frustrated junior auteur inside each of us.

All episodes of Home Movies are also available on VOD at Shout! Factory TV or on DVD from shoutfactory.com.