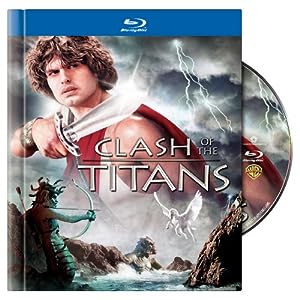 By answering a seemingly impossible riddle, Perseus, the son of Zeus, wins the hand of the Princess Andromeda in marriage. Trouble appears in the shape of Calibos, the princess’s former love, and his mother, the Goddess Thetis. In order that the dreaded Kraken not be released, Andromeda has to be sacrificed and Perseus searches for the Medusa; her head is the only thing that can stop the Kraken. Trials and tribulations follow, blood is spilled… this is high adventure at its finest!
 Some dude over at imdb.

Its not often a true classic comes along for me to be involved with at this site. Thats not to demean anything thats come before. Oh no. Im grateful to the site and its founder for everything Ive been involved with here, thats for sure.

But when we look at Clash of the Titans, this is a seminal movie. This is a true classic, for me, it stands alongside movies like Lawrence of Arabia. Others may look at me like Ive just smoked ten tonnes of hashish saying that, but this was one of the movies of my childhood. This was THE fantasy movie for me. Being 32 years old now, born in 77, I wasnt old enough to see Star Wars in the cinema when it first hit but it had a comfy home on Beta with me. However I DID see Clash in the cinema. Twice. For a four year old kid, thats a pretty big deal. I dont actually remember doing that, but my mother and father tell me I went absolutely bugnuts for the film. Apparently I loved Bubo the owl and was scared shitless by Medusa and the Kraken. Again, yep, I can see that for sure.

Take a look at the cast alone for this movie, you have Laurence Olivier, Ursula Andress, Burgess Meredith, Harry Hamlin, Pat Roach and Maggie Smith, just to name a few.

Recently, I was given the absolute honour of taking part in a phone interview with Harry Hamlin. I was involved in it with some pretty damn heavyweights of the industry, so it was incredibly intimidating, when I heard the name Nick from Chud, Nick Nunziata Im guessing, shit, talk about feeling out of my league! Think about it, youre driving a mini-cooper and youve just pulled up to the lights at an F-1 race… the lights go green… thats about the feeling I had.

So here we are guys. My portion of the interview, it was very short and sweet, we only got two questions each but Mr Hamlin was brilliant. What a guy, seriously.

Steve Croft: Morning Mr Hamlin how are you?

Steve Croft: Im great! Thanks for talking to us this morning! Ill just jump straight into it, the first question I had, basically with the Clash of the Titan movie, Greek Mythology came back in a big way recently in a lot of media, for instance, you recently did the GOD OF WAR 2 game on the Playstation 2, where you actually reprised the character role of Perseus in an alternate take on Greek mythology, where your character actually fought the lead character in the game, Kratos, yeah, what was the experience like for you, where you see yourself recreated digitally in a videogame this time as an antagonist to the main character for the hero of the game to overcome; as opposed to being the hero of the piece?

Harry Hamlin: Well, I actually only saw a little clip of this, of me in the game, the fight scene?

Steve Croft: Oh you only saw a little bit of it?

Harry Hamlin: Oh yeah I only saw a little bit of it, and I thought it was really cool so I didnt mind being killed off at all, so what I understand is the game did really well, and those old enough to know me from The Clash of the Titans, they know I played the role before, that movies not a young movie, its like, thirtysomething years old, I made it like, thirtysomething years ago?

Steve Croft: Yeah well, your actual part got a lot of critical acclaim from everybody who actually played it, so, it was quite a bit of a headspin for everybody who saw you in it!

Steve Croft: With the success of the roles a lot of actors experience, they often get typecasted with roles, you know, everybody wants Johnny Depp to be Jack Sparrow after Pirates, everybody wanted Robert Englund to be Freddy after the success of Nightmare on Elm St. After you had Clash of the Titans, or even after LA Law with your role of Michael Cuzack did you experience people giving you scripts with these roles in mind, they wanted you to be these particular roles in their movies or shows over and over?

Harry Hamlin: Well, I mean after LA Law, I got lots of Lawyer role offers, but very few toga movies are made though…

Harry Hamlin: You know, a lot of the big actors out there who are my age, all had their toga movies they had made when they were my age, and in ninety percent of the cases they all kinda went away, they all disappeared and you dont remember the Tom Cruise or Richard Gere toga movies… but Clash of the Titans seems to have these legs which go on and on and on and thirtysomething years later its back! Like I said, a lot of these guys had their toga movies… now do you  remember what Toga movie Tom Cruise or Richard Gere did?

Steve Croft: Ahhhhh the name escapes me… I think I know…(lie… I have no bloody idea! lol!)

Harry Hamlin: So yeah but somehow mine lives on! But now theyre doing a remake, in 3D so now thats obviously drumming up interest in the old movie, as is the Bluray release, which is what this interviews about, it seems to be in combination with the release of the new Clash of the Titans as well!

“Call no man happy who is not owning this bluray!”

Facts I learned from the conference call interview: