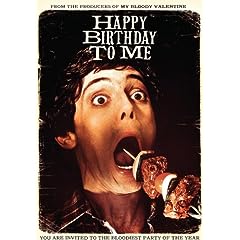 Welcome to upscale Crawford Academy, where everyone  especially new student Ginny (Melissa Sue Anderson of LITTLE HOUSE ON THE PRAIRIE)  wants to be part of the schools most popular clique. But now somebody has begun butchering the groups members. Could a deadly accident from Ginnys past be connected to the brutal killings? And as her 18th birthday approaches, will Ginny be the guest of honor at the most horrific party of all? Matt Craven (DISTURBIA), Lawrence Dane (SCANNERS) and Hollywood legend Glenn Ford (THE BLACKBOARD JUNGLE, 3:10 TO YUMA) co-star in this twisted slasher shocker from Oscar®-nominated director J. Lee Thompson (THE GUNS OF NAVARONE) that features  as its infamous poster promised  six of the most bizarre murders you will ever see!

Twisted little horror movies arent everybodys bag these days, but with Halloween fast approaching, whats wrong in giving in to a little fear? There arent any monsters with sharp claws, big teeth or who change shape. No. The monsters here look just like ones friends. Its like watching the Presidential debates; the people on the screen all sound like they have the best things in mind, but you know darn well that one or both of them are totally going to screw you first chance they get.

The DVD is filled with more moments like this and the amazing A/V Quality shines through with this digital restoration. I never saw the movie before this release and I have to say that I hate missing out on such a gem. There are no special features, but what could’ve been done? You can get a commentary from the now deceased J. Lee Thompson or Glenn Ford. Retrospectives are on the outs with horror fans. What does that leave? Well, they could’ve tossed on a trailer. Oh well, it’s still worth a blind buy.