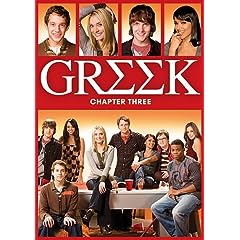 Freshman Rusty Cartwright arrives at college and decides he no longer wants to be the boring geek from high school. He decides to pledge a fraternity. He is offered 2 bids; one from his sister’s boyfriend Evan’s fraternity and one from Cappie, his sister’s ex-boyfriend’s fraternity. Rusty must learn to handle his new life, and his new relationship with his sister. His sister must decide if she loves Evan who is stable or Cappie who really loves her.

We left the Greek kids after their spring break which mixed things up a bit as Rusty had a completely disastrous time that at least ended in making up with Calvin, Casey and Cappie “accidentally” shared a kiss, and Rebecca discovered her dad had a bit of a scandal and decided to go “Girls Gone Wild,” on us, leaving Cappie needing to run off to support her and leave things with Casey as just an “innocent” spring break kiss.

The premiere brings us back to school and starting up “Greek Week,” packed with spirit and sport activities pitting the frats and sororities against each other big time. Rebecca and Casey are left with their usual tension, but also the need to deal with Rebecca’s spring break wild moment which includes some involvement from the chapter, and a chance for Casey to either love or lose her little sis.

The storylines were pretty well played out and fun to watch in usual Greek style, including continued Casey-Evan-Cappie tension along with the added effect of Rebecca. But there’s someone else jumping into the mix as well which is a bit of a surprise and totally expected at the same time, if you recall something building up for Evan at the end of last season.

It all came to a head, when Casey faced a hard decision when she learns that Max is planning to go to Cal Tech for grad school and she is offered an internship to Washington. She turns to Lauren Conrad (who appears in a dream sequence) for advice. More importantly, she turns to Cappie for advice, and he tells her to leave Max and go after her career. She decides that she has to base her decisions on her self for once and not who shes dating, and ends things with Max.

The DVD is standard for the stilted releases that this show gets. The Chapters usually contain 10 episodes and follow season structures rather than regular seasons. For example, Chapter 3 is actually the last half of Season 2. Season 3 won’t start until the end of August. The A/V Quality is amazingly sharp, but I noticed that the audio dropped out during some dialogue. There’s also some bloopers and commentaries on select episodes. Therefore, I recommend it for a rental.