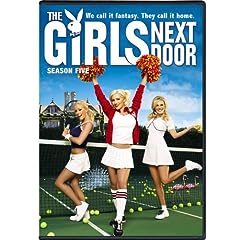 In the fifth season of this racy reality series, Hugh Hefner and his trio of blonde girlfriends — Holly, Bridget and Kendra — appear in the hit comedy The House Bunny and then head off to Las Vegas to celebrate Hef’s 82nd birthday. Back at the Playboy Mansion, Holly decides to redecorate and Bridget starts work on a horror movie. Later, the girls all attend the Kentucky Derby and then pose for their 2009 calendar.

The fifth season focuses on several different plotlines. Included amongst them are: Holly’s special nationwide search of the perfect 55th Anniversary Playmate, Bridget’s plans for a crazy Las Vegas wedding and her departure from the mansion to film a new series for the Travel Channel, and Kendra’s participation in the world’s sexiest softball game while also preparing for her own departure from the Playboy universe. This season, like previous ones, also features several celebrity appearances, including Anna Faris, Pamela Anderson, Stacy Burke, and Karissa and Kristina Shannon, two of Hugh’s next girlfriends.

The most dramatic and emotional season so far, the fifth season of The Girls Next Door marks the final season to feature Hugh’s original Girls Next Door girlfriends. At the end of the season, we get to see the actual departure of Bridget and Kendra, while number one girlfriend Holly didn’t get a televised breakup -but she does allude to her impending breakup with Hugh.

The special features on this DVD set include a collection of features called “The Big Easy Does It,” “Scubba, Scubba, Do!” and “Third Time’s the Charming,” which further document the lives and crazy happenings around the girls. There is also some absolutely hilarious commentary for each episode provided by Holly, Bridget, and Kendra. There are even deleted and bonus scenes that are just as amazing and ridiculous as the series itself.

The DVD itself is kind of lackluster, but follows the downward slide that the series has had on DVD. The episodes seem to be repeating previous seasons and there’s no real pop to the A/V Quality. There’s always the promise of uncensored nudity. But, it’s not that exciting anymore. Still, I’d recommend a rental to fans.
RELEASE DATE: OUT NOW!