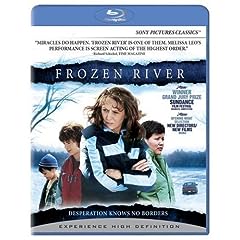 Frozen River is a dramatic feature film which takes place in the days before Christmas near a little-known border crossing on the Mohawk reservation between New York State and Quebec. Here, the lure of fast money from smuggling presents a daily challenge to single moms who would otherwise be earning minimum wage. Two women- one white, one Mohawk, both single mothers faced with desperate circumstances- are drawn into the world of border smuggling across the frozen water of the St. Lawrence River. Melissa Leo (21 Grams, The Three Burials of Melquiades Estrada, television’s Homicide: Life on the Street) plays Ray, Misty Upham (Edge of America, DreamKeeper, Skins) plays Lila, and Oscar nominee Michael O’Keefe (The Great Santini, Caddyshack, Ironweed) plays the New York State Trooper who ultimately brings the two to justice.

Frozen River aspires to the same eloquence in forging a conversation between the interior and exterior worlds, drawing a quick sketch of poverty and solipsism that evolves into a giant campfire hug of teaching the world to sing or some such facile bullshit. More’s the shame that it’s all tattered sackcloth for a performance by veteran character actress Melissa Leo so ferocious and vulnerable that it ranks instantly among the best of the year. Ray (Leo) is a trailer-park mama living on the New York-Canadian border, banking paychecks from the Yankee Dollar store and searching for a way to explain to her two kids that Daddy disappeared a few days before Christmas with the money they were saving for an upgrade to a doublewide. A litany of clichés is deadening no matter how true, and here we find Ray meeting up with Mohawk trailer-park mama Lila (Misty Upham) and getting embroiled in a human smuggling operation that allows Ray to opine on the kinds of troubles that would actually inspire reasonable people to stow away in the back of a beaten-down relic from Detroit to escape into a world of Yankee Dollars and Rent-To-Own rackets.

Two important things that Courtney Hunt manages to accomplish quite well is creating two characters that are genuine trying to survive but also realistically hiring actors that make the film seem natural. Not Hollywood. It’s a glimpse into a world that we just do not see on film. But to watch two women from two different worlds and foregoing whatever they may think of each other or whichever prejudices they have and establish that working relationship and eventually a friendship because mutually they need each other in order for their children to be taken care of. I found this chemistry between the two actresses powerful and how they were portrayed in a variety of emotional situations was well-done.

I really have to applaud Courtney Hunt for doing her research and writing a touching, heartbreaking and yet gripping storyline and translating it well for film! And Melissa Leo for her portrayal of a mother who has nothing left and she no choice but to use her last resort and Misty Upham for also making the film seem natural and real.

The Blu-Ray does a great job of showing off the recently Oscar nominated film. The A/V Quality is quite impressive for a picture that’s got very sparse landscapes. The sole special feature is a commentary from the film’s director and producer. Courtney Hunt has got a ton of material to cover and she runs into the problem that accompanied P.T. Anderson’s best commentaries. She needs a venue all onto her own to cover the ideas she had with this film. This is a recommended blind buy.