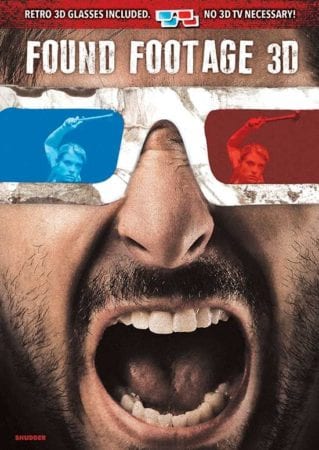 “Found Footage” is a 2D/3D movie previously available on Shudder and now making its way to home video. If you’re a fan of the 80s All Over podcast, you will have heard the film’s co-producer Scott Weinberg discuss working on the movie. After listening to that podcast’s disdain for the 3D craze of 1983, I approaches this film confused. But, the 3D application is more for visual appeal and less about the central idea of poking fun at found footage films.

But, even the idea of lampooning found footage falls to the wayside about an hour into the film. That is also when I stopped being impressed by having the traditional 3D glasses and began to really pay attention to the film. Naturally, I restarted the film because I’m still a stupid chimp that gets distracted by novelty. That helped. What I missed the first time was how natural the horrific comedy gave way to true horror.

It’s deceptive in how smoothly it moves, but damn if it didn’t slip past me. I’m not sure how much of that to chalk up to producer Kim Henkel. Henkel was one of the original talents behind Texas Chainsaw Massacre, so I’m not sure how horror pedigree translates from the producer to the actual creative talent. Still, it’s a film that holds up on repeat viewings. Check out Found Footage.