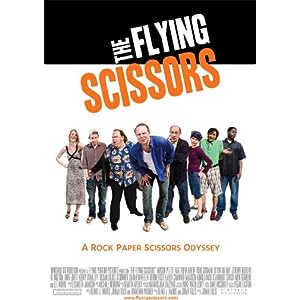 The Flying Scissors is a 2009 mockumentary that follows eight entrants in the a fictional National Rock Paper Scissors League (NRPSL) Championship. The film focuses on the quirky but relateable characters and their desire to balance the nuances of everyday life with the dreams of becoming a champion.

RPS (Rock, Paper, Scissors) isn’t perfect material for a mockumentary. But, what is? Realizing that the premise can only be taken so far, the competition only occurs in the final twenty minutes of the movie, well after two acts have gone by as we’ve become introduced to a majority of naturally funny contestants as diverse as you’d expect as well as the individuals behind-the-scenes fighting against The Coin Toss Consortium for a place to match off.

The characters are surprisingly well developed for a film that is, after all, a joke. Fully two-thirds of the movie is devoted to fleshing out the competitors and the tournament’s unhealthily type-A organizers, Alan Pope (Matthew Arkin) and David Sanderg (Benim Foster). The film’s long-overdue climax is, of course, the tournament, which is hastily relocated to a B-grade hotel in White Plains, New York when the original venue — Madison Square Garden — dumps the rock, scissors, paper event in favor of a far more exciting coin tossing tournament.

The time spent with these characters does build an increasingly strong sense of who these people are and why they are investing so much in this contest. The payoff for this becomes very apparent when the film reaches its climax and you start to realised that you do care a lot more about these people than you thought. Still, most of the jokes fall flat. But, they’re competently delivered by the actors, who for the most part hit the Guest mockumentary tone just right. This isn’t that laudable an acheivement, as anyone with a camera has attempted the mockumentary format.

The DVD comes with a commentary from the directors as its sole special feature. The A/V Quality is pretty good for an indie flick. But, there was a lot of blurred movement in later scenes and some digital noise. The Dolby track provided a robust soundstage and offered up a decent means of supporting the dialogue. Still, it’s just a rental.