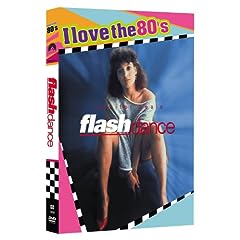 That Oscar-winning title song buzzes in your ears long after the movie has stopped. The attraction here is youthful spirit and a pulsating score, because the weak story is merely a conduit for the song-and-dance numbers. The plot is every young woman’s daydream come true. Jennifer Beals holds down a macho job as a welder by day, but performs erotic dance numbers in a club at night. It’s not a strip club, so her morality remains intact. She dates her wealthy boss (Michael Nouri) and practices hard for the day she can audition for the upscale, local dance school, even though she has no formal training. It is malarkey, of course, unless you view this as total romantic fantasy. It works because you are carried along by the sheer force of the energetic, boisterous, MTV-style imagery by director Adrian Lyne. Beals is a plus as the stubborn, pouty, somewhat eccentric young woman made all the more interesting for her driving ambition. In the end, she is aided by her Prince Charming, who arrives bearing favors. Mind you, this is not the same as a rescue, as Beals is one rather tough damsel who does just fine on her own.

“Flashdance” has a typical or predictable plot, but I would not call it weak because of the actors and the memorable characters they created. The viewer is bonded to the characters in this movie- one cares what happens to them. The cinematography in this movie is great, especially the opening credit scenes of Pittsburgh as Alex is riding her bike to work.

The DVD is as commonplace as my dislike of Canada. The same special features have been ported over from the previous DVDs. The A/V Quality is the same and nothing else has improved. But, you get a CD sampler with Erasure on it. You remember Erasure, don’t you?