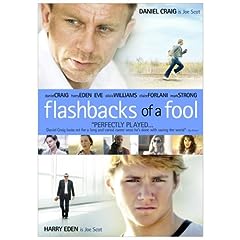 Daniel Craig stars as Joe Scott, a Hollywood star past his prime, who, in the wake of his best friend’s death, reminisces about his troubled childhood in England and retraces the path that led him to a life of loneliness and self-indulgence. Written and directed by Baillie Walsh, this poignant tale also features exceptional supporting performances from Harry Eden, Eve, Olivia Williams, James D’Arcy and Claire Forlani.


Leading man Daniel Craig apparently made Flashbacks of a Fool (he was also one of the executive producers) in between stints as James Bond, and you can see why he was attracted to it; Joe Scott, the character he portrays in this film, could hardly be less like the suave, ever-resourceful 007. Ensconced in a fab, oceanfront Malibu crib, Joe is a movie star on the skids. Hooked on coke and drink, engaging in group gropes with dumb Hollywood bimbos, hes sunk so low that his sassy assistant (Eve) calls him “a disgrace to white folks,” and even his agent is sick of him, which is somewhat akin to a parasite dissing its host (its a measure of writer-director Baillie Walshs scripts lack of depth that we never really see what made Joe so great in the first place, or so bad now). When a call comes that a childhood friend has died, Joe decides to return to his native England for the funeral, whereupon an extended flashback kicks in. Young Joe (Harry Eden), it seems, was as randy and hopelessly naïve as a lot of teenage boys. Though he had the hots for the sexiest young thang in town (a coastal village thats as lovely in its way as the California setting, both of them handsomely photographed by cinematographer John Mathieson; the locations, in fact, are probably the most attractive element of the film), he also wasnt immune to the advances of Evelyn (Jodhi May), the older married woman who lives next door.
The film is an ambitious but disappointing, regret-filled psycho-drama. Some individual scenes are impressive: a portentous, Ian McEwan-lite set-piece involving playing children or the scene illustrating the confusion and nascent vanity of the teenage Joe.

As strong as some moments are, the film struggles to hang together as a whole and there are lapses that could have benefited from greater exploration, such as the friendship between Joe and Boots that feels under-developed.

The cursory explanation of the fate of one key character also drew some unintentional giggles at the screening I saw, while the final few scenes felt rushed given the emotions involved. It prevented the film from carrying a really lasting emotional impact and gave rise to the suspicion that Walsh had over-indulged during some of the coming-of-age material.

The DVD is pretty fun and informative. It suffers from the typical Anchor Bay layout of featurette, trailer and then superfluous material. It’s nice to see a well-made British drama break out in Region 1. It’s just that it deserved a slightly better package than this. Oh well, it’s a rental.