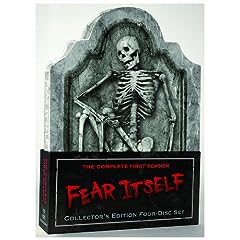 A television series broken down into 13 separate 60-minute films from premiere horror writers and directors.

When Showtime declined to renew Masters of Horror after the 2007 season, I felt that it was giving up on what could’ve been this generation’s Twilight Zone or Tales from the Crypt — or at least Tales from the Darkside. Now, thankfully, NBC has emerged to pick up Mick Garris’s concept of renowned horror filmmakers directing weekly one-hour “mini-movies” featuring name-brand actors and edgy content. The title has changed to Fear Itself, but if the first three episodes are any indication, the quality of the show hasn’t faded in this new incarnation.

The 13 episodes should find something for everyone from atmospheric pieces to out and out blood curdling, scream inducing chills. Directors include Stuart Gordon (THE RE-ANIMATOR), Mary Harron (AMERICAN PSHCHO), John Landis (AN AMERICAN WEREWOLF IN LONDON) and several others. Rather than discuss each one, here is the best and the worst.

Of the 13 the weakest was an entry called CHANCE starring Ethan Embry. It tells the tale of a man driven by failure and poverty to make a decision that results in catastrophe. When Chance (the character’s name) tries to sell an antique pot to a dealer, he discovers he’s been had having paid much more than the dealer is willing to offer. As he is driven to the edge of sanity, he continues to see himself but separate from his own body. The doppelganger lives out his wildest dreams of revenge, killing the dealer and taking Chance down a road he shouldn’t travel.

As the episode unfolds, Chance has a hard time differentiating between reality and fantasy, never quite sure who is pulling the strings. Is it the double he sees committing these heinous acts or is it really Chance, his mind twisted by desperation? The answer is not quite satisfying and the episode feels like it takes too long to go nowhere. But most episodes aren’t of this quality.

Instead they’re like the best one, SKIN AND BONES, directed by Larry Fessenden (THE LAST WINTER) and starring Ball State grad Doug Jones (Abe Sapien from the HELLBOY films). The story opens with an angry teen about to head out to the mountains in search of his father whose been missing since he left 10 days earlier with a group of friends. When his uncle and lead ranch hand tells him to stay the pair has words and the uncle decides to head out. But there’s no need when the man returns, beaten and frostbitten.

But the man isn’t the same as when he left. Hollowed out cheeks and razor sharp teeth as well as an uncontrollable hunger for meat make everyone wonder what happened. His wife, brother, two children and an Indian who helps on the ranch all look at him differently. The Indian begins to tell his brother about his uncle who did the same thing. Returning from the mountains a rage had overcome him and he was possessed by the “wendigo”, a spirit who takes over its host and lives on rage and destruction.

What’s most noteworthy about FEAR ITSELF – at least this particular episode – is that the production is noticeably crisper and classier than that of your typical MASTERS OF HORROR entry. This is a major plus, as that show had a tendency to walk on the bland side.
The DVD comes with some director interviews as the sole special features. The A/V Quality is sharp and you’ve got what appears to be a skeleton spankin’ it on the box art. What ruins it all for me is how the discs are packaged. The overlay of the double-sided discs allows for easy mistakes to happen. One simple drop out of the box and you can’t watch two episodes. A little more forethought could’ve prevented such problems. Oh well, what are you going to do? I’d recommend it for a rental.

0 0
Previous ArticleFIRST 48 HOURS, THE – THE MOST INTENSE INVESTIGATIONSNext ArticleSPONGEBOB SQUAREPANTS: THE FIRST 100 EPISODES