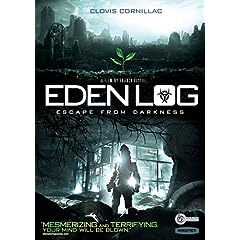 A man regains consciousness at the bottom of a cave, with no concept of how he arrived there, nor any idea who the dead man is at his side. Only one thing is certain – he has to escape the menacing creature that’s pursuing him. His journey back to the surface takes him through a cemetery – like world that s been abandoned by a mysterious organization called Eden Log.

In Franck Vestiel’s low-budget debut Eden Log, which begins, like life itself, in a pool of primal ooze. From this there emerges a man (Clovis Cornillac), gasping for breath, covered in filth and no less disoriented than the viewer. As he gropes his way upwards through his dark, dank surroundings towards some kind of illuminating truth about who, and where, he might be, he takes us on an allegorical journey that will accommodate all manner of theological, social and ecological concerns, and will end in a city of pristine beauty whose paradisiac qualities have already been undermined by the filth, abjection and horror exposed beneath. This is a long way from the space opera of Star Wars, but those who like a more transcendental brand of SF (think 2001: A Space Odyssey, Solaris or The Fountain) will find themselves on familiar ground.

Eden Log is structured like a video game. Our amnesiac hero (if, indeed, he is a hero) ascends through different levels of tree roots, mud and machinery, on the way receiving obscure clues and fragments of information, facing various opponents (ferocious subterranean mutant workers, ambiguous technicians, and armed guards from the surface) and having to come to terms with his own unique status in the world of Eden Log.

Mood is key here. The wonderful underground sets drip with atmosphere, and have been shot with filmstock so utterly desaturated that it takes a while to realise there is any colour at all. The protagonist spends the first ten minutes of the film grunting incoherently, and even when he begins to speak, asks questions rather than making statements. Such action as there is tends to be impressionistic instead of graphic, and even the explanations offered by the technicians are fragmented and allusive.

There is a lot going on here. Vestiel’s stylishly bleak parable of paradise lost dramatises humankind’s unbounded capacity to exploit everything, including other humans. Its world is divided into all-too-recognisable hierarchies of haves and have-nots, and while these may be as old (in SF terms) as HG Wells’ novella The Time Machine (1895) and Fritz Lang’s groundbreaking film Metropolis (1927), the arresting image here of the ‘strange fruit’ engendered by slavery is utterly original. Meanwhile Vestiel’s Tree of Life taps into current preoccupations with the environment (with mankind at the root of all evil), while also pointing to all manner of religious archetypes.

The DVD has no supplementals. The A/V Quality is a mess with the audio seeming way too flat for a genre film. I wish that someone would’ve given the cinematographer a copy of Visions of Light to watch. You can make and break a movie by the photography. The film’s a mess to watch, therefore it makes it hard to understand. Pass on the flick and watch something better.
RELEASE DATE: OUT NOW!