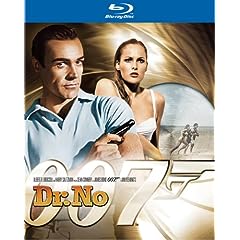 On a mission in Jamaica, ultra-suave Agent 007 (Sean Connery) finds mad scientist Dr. No (Joseph Wiseman) concocting a plot to derail the U.S. space program and take over the world. With the help of Felix Leiter (Jack Lord) and sexy Honey Ryder (Ursula Andress), Bond battles seductive double agents and sinister villains in his quest to save the human race. The film that launched a decades-long Bond franchise, Dr. No is a classic.

Dr. No was the first film in the James Bond franchise. Sure, the first Bond novel was Casino Royale, but United Artists wasnt going to let a little thing like that stop them. No, they scoured Britain and America to find the finest actors to take part in the first ever James Bond film. How did they end up finding their Bond? They found Sean Connery because the producers wife liked the young Scottish actor in Darby O Gill and the Little People. Who knew that Walt Disney would be indirectly responsible for giving the world Sean Connery as James Bond?

The film opens with a primitive Bond style opening. The opening ends with an introduction to the problem at hand in Jamaica. A spy for M.I.-6 makes contact with London in order to tell them about two things. Theres a secret project under development at Crab Key Island and it involves Dr. No (Joseph Wiseman). The action moves to the Le Cercle Club, where we meet James Bond (Sean Connery) for the first time. Its when Sylvia Trench (Eunice Gayson) asks him for his name, that Bond delivers one of the most classic lines of the 20th century.
Bond is soon called to Ms office, where were introduced to Ms sexed up secretary Miss Moneypenny (Lois Maxwell). Moneypenny and Bond talk for a bit, before M (Bernard Lee) requests Bond to enter his office. M tells Bond about some outside force that is interfering with the rockets at Cape Canaveral. The CIA has asked for another British agent to be sent in to help out with the case. Given the bare facts about the case, including the info on his contact Felix Leiter (Jack Lord)Bond gets ready to head to Jamaica.
After a difficult arrival at the airport and a driver who kills himself, Bond eventually arrives at his destination. Bond meets up with Leiter and Leiters partners in order to find a way to venture to Crab Key Island. As soon as Bond manages to sail to Crab Key Island, he finds himself confronted with the stunning beauty Honey Ryder (Ursula Andress). Soon after that, Bond uses Honey as his personal guide through the dense jungle on Crab Key Island. Its not long before Honey and Bond are capture by Dr. Nos guards.
What follows is the first Bond lair captured on film and the introduction to the first major Bond villain, Dr. No. The evil doctor soon explains his entire plan to undermine the U.S. missile program. He soon unveils his association with S.P.E.C.T.R.E. and after a prolonged scene were all but treated to Dr. Nos entire backstory. Thus, starting a classic Bond tradition where the villain gives away his plans right at the start of the third act. Its a wonderful thing.

The Blu-Ray is an amazing piece of work. FOX has constantly gone out of their way to top each achievement in the Blu-Ray field. Coming on the heels of the 2006 Ultimate Editions, FOX has rolled out Bond on Blu-Ray. The amazing A/V Quality coupled with the treasure of special features is bountiful. The only catch is that a lot of the special features are direct ports from the previous DVD. If you can forgive that, then there’s room for this title in your collection.