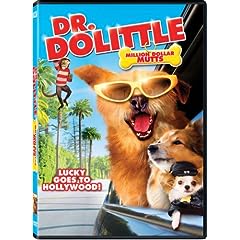 When college-bound “animal whisperer” Maya Dolittle (Kyla Pratt) assists movie star Tiffany Monaco’s (Tegan Moss) Chihuahua, she gets sucked into the allure and flashiness of Hollywood after an impressed Tiffany offers her a plum television gig. But Maya’s wisecracking mutt, Lucky, helps her hold on to her perspective — and her true dream of becoming a veterinarian — in this adventurous, cuddly family comedy.

Kyla Pratt plays Maya, the daughter of the famous Dr. Dolittle who is currently off in China helping the pandas, and she herself is about to go to pre-veterinary university in San Francisco but keeps finding out that the suitcase she’s packing always ends up unpacked! This is because her dog Lucky can’t bear the thought of her leaving and “helps.” Viewing an introductory university tape, Maya finds out that the entire seven-year curriculum entails no immediate work with real animals (while her pet Monkey is annoyed because he had been watching something else!). French-accented Monkey talks to Maya (as do all animals, because she can understand them) while creating Etch-A-Sketch masterpieces, and Lucky tries to convince her that there are more than enough animals she can help on her very own street.This is an immensely light-hearted movie both conversationally and plot-wise, where bright colors abound and we forget, for the duration, that war and poverty still prevail in the real world. We’re too busy watching animals in pink tiaras, high heels, tutus and motorcycle outfits ensconced in luxurious circumstances, and even Lucky wears sunglasses and dances disco in Hollywood!

Maya helps Tiffany solve a major problem and is then offered her own TV show, The Animal Talkers (with Tiffany as co-host) as evil businessmen begin to exploit her. Eventually she’s more than a bit dismayed at interviewing the owners of white hip-hop rabbits who wear diamond locks as fashion statements as opposed to being able to know how to really help sick and injured pets.

The DVD is a decent disc that sports off featurettes that cover various aspects of the production. Mainly, it’s the kind of kid power stuff that you expect to see on a release like this. There’s lots of animal coverage to keep the kids entertained, but I can’t help but find it all very cheap. There’s only so many times that you can keep cloning a film before it gets stale. Guess what people, it got stale.
RELEASE DATE: 05/19/09

Friday News: So You Wanna Save the Planet, Buddy Games

Loot Crate Rides With the Dept of Magical Transportation!