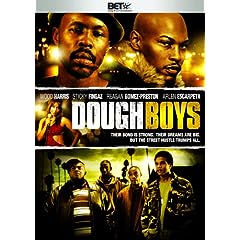 For the Dough Boys every day is a struggle to survive. Determined to make something of their lives, these four friends work any hustle no matter how risky. But when they bite off more than they can chew, their loyal bond is tested as they fight to stay alive. Now, the rules of the street that they live by are the very rules that could destroy them. Starring Wood Harris, Sticky Fingaz, Reagan Gomez-Preston and Arlen Escarpeta.

In Dough Boys, Corey (Escarpeta), Smooth, (Hardrict), Black (McRae) and Long Cuz (Eduardo) live by their own rules and survive by their wits. Four friends bonded by circumstance and the streets, they struggle to make good in a world that seems determined to keep them hustling. With their dreams always just out of reach, The Dough Boys think they have found the one big score that will change their lives, and all they have to risk iseverything.

The film is a stereotypical street thugs living by their own code tale. Sticky Fingaz is becoming a new cult star among the ethnic set. But, what does that mean? You can only star in so many C-list films before it starts to drag your career down. The big deal surrounding the film is its charitable roots with its connection to getting young punks off the street. So, they can work in a movie that glorifies gang warfare.

The DVD sports no special features. The A/V Quality is decent for a TV-movie. I just wish that there was some material about the Give Back Raise Up Program. Still, I’ll take what I can get. It’s a fun rental, when you’re done with your season sets of The Wire.
RELEASE DATE: 06/16/09