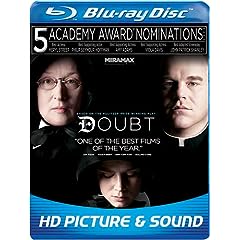 It’s always a risk when writers direct their own work, since some playwrights don’t travel well from stage to screen. Aided by Roger Deakins, of No Country for Old Men fame, who vividly captures the look of a blustery Bronx winter, Moonstruck‘s John Patrick Shanley pulls it off. If Doubt makes for a dialogue-heavy experience, like The Crucible and 12 Angry Men, the words and ideas are never dull, and a consummate cast makes each one count. Set in 1964 and loosely inspired by actual events, Shanley focuses on St. Nicholas, a Catholic primary school that has accepted its first African-American student, Donald Miller (Joseph Foster), who serves as altar boy to the warm-hearted Father Flynn (Phillip Seymour Hoffman). Donald may not have any friends, but that doesn’t worry his mother, Mrs. Miller (Viola Davis in a scene-stealing performance), since her sole concern is that her son gets a good education. When Sister James (Amy Adams) notices Flynn concentrating more of his attentions on Miller than the other boys, she mentions the matter to Sister Aloysius Beauvier (Meryl Streep), the school’s hard-nosed principal. Looking for any excuse to push the progressive priest out of her tradition-minded institution, Sister Aloysius sets out to destroy him, and if that means ruining Donald’s future in the process–so be it. Naturally, she’s the least sympathetic combatant in this battle, but Streep invests her disciplinarian with wit and unexpected flashes of empathy. Of all the characters she’s played, Sister Aloysius comes closest to caricature, but she never feels like a cartoon; just a sad woman willing to do anything to hold onto what little she has before the forces of change render her–and everything she represents–redundant.

Guilt is a way of life to Meryl Streep’s Sister Aloysius who believes in instilling fear in everyone around her. This lemon-mouthed, cynical dragon is so sour she believes a student would set his foot on fire or instigate a nose bleed to avoid school. Hence it is not surprising she clashes in a big way with the popular and progressive Father Flynn (Philip Seymour Hoffman), who not only has a cheerful disposition and communicates easily, but (shock horror) takes three sugar cubes in his tea, writes with a ballpoint pen and has long fingernails. Certainty without proof is her rationale when Sister Aloysius sets on a course to force her adversary to leave in uncertain circumstances.

Hoffman can do no wrong as he delivers yet again an exquisite portrayal against the formidable Streep; their verbal exchanges sent a shiver up my spine. Streep’s constant mannerisms (shifting eyes and humming assent) were a distraction for me, but Viola Davis as the mother of the school’s first black boy, of whom Father Flynn is suspected of molesting, brings the film’s most powerful moment. Amy Adams is excellent as the impressionable young nun eager to assist the pursuit of any wrong doing, showing her ability to play a role with far more depth than those she portrayed in Enchanted and Miss Pettigrew.

Tension builds as we tread the pathway lined with both guilt and innocence. Even the camerawork at one point is at an angle, showing the skewed point of view. But ultimately it is up to us, the audience, to make our own assessments of what is right and wrong and Shanley directs the final scene, set in the chilly, snow-covered garden of the school to perfection.

The Blu-Ray package isn’t that different from the DVD. Sure, you get the rather lackluster looking movie in 1080 A/V Quality. But, High-Def isn’t going to save drab sets or poorly lit scenes. The special features are fun and they take you from the stage origins of the show through the production. But, the only really informational material is gleamed from the commentary with the writer/director. It’s a hard movie to enjoy, but it’s one that’s well worth the venture. Therefore, I recommend it for a blind buy.
RELEASE DATE: 04/07/09