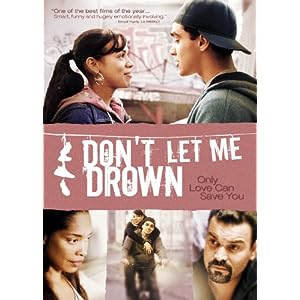 In a post-September 11th world overflowing with fear and hate, two Latino teens discover that sometimes the only thing that can keep them from drowning is love.

Cruz Angeles directs this moving romantic drama about two Brooklyn high school students — Lalo, son of a poor Mexican immigrant, and Stefanie, sister of a 9/11 victim — who lean on one another to survive the confusion and rage surrounding them. But fearing their families’ reactions, the young lovers must keep their relationship secret. It combines a love story akin to “Romeo and Juliet” with a street-level authenticity of “Boyz in the Hood”, this film is an immensely impressive first outing for director Angeles. He aptly recreates the textures of a city and the turmoil felt by so many families in the five boroughs at that particular time.
“Don’t Let Me Drown” suffers from clichés, and a few odd logic gaps. It seems stuck uncomfortably between pushing the romance into a more fantastical world and keeping it chained to the reality of the city. But the realistic and sentimental images of Brooklyn life for its characters keep the film from focusing too strongly on only the love story. It is when the romance takes over the film in the latter half that it sinks into a somewhat bland mediocrity. This movie is indeed all about Lalo and Stefanie, and though nothing original happens to separate their love story from the thousands of love stories out there, at least there story is well told, without ever getting dull or ham-fisted.

The DVD comes with a trailer as its sole special feature. The A/V Quality is pretty strong for an indie romantic flick shown in standard definition. I felt that even the Dolby track was a rather full affair that played with its urban soundstage to create a well-defined home theater experience. But, I wish we could’ve received a commentary from director Cruz Angeles. I’ve never heard Angeles speak about cinema before, but I feel that Cruz might have some intersting things to say. I’d recommend a rental before a purchase.