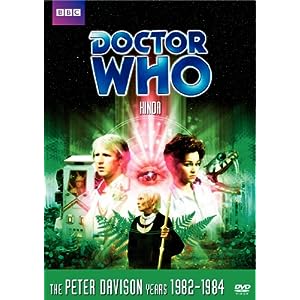 On Deva Loka, a sylvan paradise planet with no predators, diseases or civilized roadways, Nyssa (due to Monarch’s two attempts to turn her into an android) stays in the TARDIS to fully recover from mild mental disorientation, under the Doctor’s Delta Wave Augmenter while the others go exploring. The Doctor and Adric find a survey team assessing the planet for colonization, and cracking under the stress of three fellow members (half the crew) disappearing without a trace. There’s also a primitive and almost entirely speechless native culture on hand who curiously have about them a few items of technically advanced skill and knowledge. Meanwhile Tegan succumbs to a dreaming tree where an evil entity awaits a catalyst for entering the real world.

The Doctor, Tegan & Adric decide to explore a new planet called Deva Loka while Nyssa sleeps in the TARDIS, they become separated when the Doctor & Adric come across a robot which then takes them to a camp where a small team of people are there assessing the planet for possible future colonisation. Tegan falls into some hypnotic trance where she suffers a bizarre hallucination type dream, the Doctor becomes interested in the events of Deva Loka when the leader of the team Sanders admits three other members of the team have mysteriously disappeared without trace…

The bulk of the heroism is left up to Peter Davison. But that’s no problem – Davison delivers his first solid performance as the Doctor, backed by an unusually superb guest cast. Nerys Hughes’ Dr. Todd makes a great surrogate companion, while Simon Rouses mentally disturbed Hindle completely steals every scene he’s in. With all this greatness, how can the story possibly fail? It doesn’t. Excluding a couple of embarrassing moments, most notably the famous ‘rubber snake’ at the end.

The Kinda are a peaceful people, dressed in Pacific Islander type skirts. They are telepathic, but a select few have voice, such as the wise blind old woman Panna, and her disciple, the preteen Karuna. “No predators, no disease, no adverse environmental factors, the climate is constant within a 5 degree range, trees fruit in sequence all year around”…yes, they are the people in their Eden, where there’s no sense of a chronological time. But in every Eden, there is a serpent. The overall idea of the story is how people identify themselves and others by stereotypes and categories, creating the illusion of permanence. But dividing between “among-we” and “not-we” creates a duality, which further becomes the source of illusion and suffering.

The DVD comes with an audio commentary from the surviving cast members and a ton of featurettes. You get a rather lengthy series of deleted and extended scenes. Plus, there’s detailed breakdowns of the special FX used in the production. I didn’t get the point of the optional CGI effects bit, but there was a nice isolated score track to be found. Good times for all, even if it is my least favorite Doctor Who. In the end, I’d recommend a purchase.