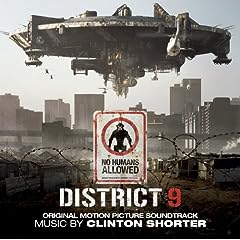 The premise of the film, which is based on Blomkamps short film, Alive in Joburg and was produced by Peter Jackson, centers on the fallout caused by a group of alien refugees stranded on Earth (in Johannesburg) and forced into a segregation camp (the title comes from District 6, a former inner-city residential area in Cape Town infamous for the forced removal of 60,000 residents in the 70s by the Apartheid regime).

The original score for District 9 is by Canadian composer Clinton Shorter. He’s a previous collaborator of the director. While a great movie, the score didn’t have any memorable moments. Maybe that comes from being in a generation dominated by John Williams giving everyone a legendary theme. It’s background fodder for the most part akin to the socially aware Sci-Fi of the 1970s. I appreciate the music, but it doesn’t mean I love it.

THE BALL TAP AT “ADVENTURELAND”

BEHIND THE SCENES WITH THE ANGRY GRANDFATHER AT “ADVENTURELAND”