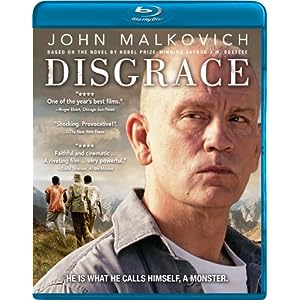 In a landmark performance, Oscar nominee John Malkovich (In the Line of Fire, 1993) stars as Professor David Lurie, whose world is shattered when he is fired for seducing a college student. He finds peace at his estranged daughter’s modest farm in South Africa until a horrific incident of terror and violence forces Lurie to confront his beliefs and the disturbing racial complexities of the new South Africa. Based on the Booker Prize-winning novel, DISGRACE stands out as a gritty, gripping drama of brutality, survival and hope.

Professor David Lurie (John Malkovich) is an aging Lothario of sorts, forlornly dispensing lines of Byron and Wordsworth to disinterested university students in Cape Town. He begins an ill-advised interlude with a young coloured woman — that is someone of mixed race — taking his course, and before long, the school administrators learn of the affair and insist on his resignation.

At heart the film is concerned with the male sexual urge. Both in terms of plot and dialogue the film tries to understand the rampant male libido, its place within the social order and its consequences for women. At once procreative and destructive, amorous and violent the male libido is, to say the least, problematic and no-one is more aware of this than Professor David Lurie. Lurie is however not just a predatory male. He is a cultured intellectual who understands his drives in terms of Romantic philosophy and in particular through Byrons poeticisation of the male libido as the mad heart. He cites William Blakes Neitzschean dictum that it is better to murder a child in its cradle than nurse an unacted desire and in an exchange with his daughter suggests that it is societys attempt to repress the male sexual urge that is the problem, not the urge itself which is, rather, essential to the condition of maleness.

The film is an unrelentingly depressing portrayal of present-day South Africa, wherein brutality is tolerated as inevitable and humanity is sacrificed for the sake of co-existence. John Malkovich does a good job with a difficult character, not shying away from his unpleasant nature and finding moments of humility towards the end, though sometimes the film verges on enjoying Davids sexual pathology and arrogance, which leaves a bad taste.

The Blu-Ray comes with interviews from the cast and crew. There’s also a rather comprehensive look behind the scenes. If that wasn’t enough, there’s a trailer for the film. The A/V Quality sports a rather strong transfer with a robust DTS-HD 5.1 audio track. I’ve never seen an international indie film look so strong. Still, I’d recommend a rental before a purchase.