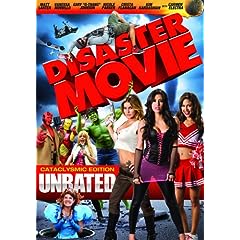 In DISASTER MOVIE, the filmmaking team behind the hits “Scary Movie,” “Date Movie,” “Epic Movie” and “Meet The Spartans” this time puts its unique, inimitable stamp on one of the biggest and most bloated movie genres of all time — the disaster film. DISASTER MOVIE follows the comic misadventures of a group of ridiculously attractive twenty-somethings during one fateful night as they try to make their way to safety while every known natural disaster and catastrophic event — asteroids, twisters, earthquakes, the works — hits the city and their path as they try to solve a series of mysteries to end the rampant destruction.

About forty minutes into “Disaster Movie,” shortly after Hannah Montana/Miley Cyrus (Crista Flanagan) got hit by a meteor but still before the scene where Disney princess Giselle (Nicole Parker) transformed into a buff black man and “turned this shit out” in a “Step Up 2 the Streets” parody, an epiphany hit me: I, like all living things on this earth, will one day die. Usually thoughts of this nature rustle up unsettling feelings of fear and maybe a little critical self-reflection in a person, myself included. For the first time, however, the mere thought of imminent death seemed like a sweet, luxurious respite in comparison to the untold-in-number miseries being endured in that theater. Suddenly I was transformed, no longer afraid of my ultimate fate.
It takes two minutes for the first crotch shot, four minutes for the first belch gag, thirty for someone to get breast milk on their face, forty-five for someone to get feces on their face, and about sixty for a record scratch to tell us that something peculiar just happened. In between, the characters relentlessly name-check movies and celebrities and websites and any other manner of the vaguely familiar.

The DVD is a special edition that feels short-bus special. You lack the 1080 bump of the Blu-Ray, but you get the pointless special features. I don’t care about the cribs of the film’s stars. There’s no point to over-explaining the loose parodies of film characters. Then, the film killed me with the I’m Fucking Matt Damon round-up. The ADD Generation has won and killed all my sensibilities. Don’t even rent it.