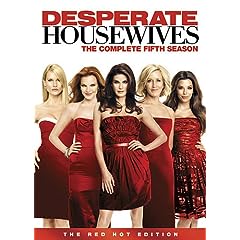 A primetime soap with a truly contempoary take on the happily ever after, Desperate Housewives takes a darkly comedic look at suburbia where the secret lives of housewives aren’t always what they seem. Desperate Housewives The Complete Fifth Season fast forwards five years where new mysteries bind true friendships with a balance of humor and drama, twists and surprises.

For the most part, “Desperate Housewives” season five is still pretty good. There are plenty of moments that are funny, sexy, and suspenseful. There was nothing wrong with the acting. The regular cast is back and the acting is fine as usual. There was nothing wrong with the presence of Teri Hatcher (Susan), Marcia Cross (Bree), Felicity Huffman (Lynette), Eva Longoria Parker (Gabrielle), Nicolette Sheridan (Edie), and season four newcomer Dana Delany (Katherine) on the screen. Same goes for the other cast members as well. Along the way in season five there were some newcomers. The most notable newcomer to season five was Neal McDonough, who plays Edie’s new husband Dave. This character provides most of the story arc to season five which means that this character has a deep dark secret that plays out during the season (quite similar to Dana Delany’s character in season four). McDonough is very good here and there’s no fault in his character’s storyline.

There were other newcomers to season five, and many of the new faces were provided thanks to the five year jump that this show took at the end of season four. There are now older actors who are playing the Scavo kids (Lynette’s three sons and one daughter). Susan and Mike’s son, born at the end of season four, is now five. And Gaby and Carlos have two daughters (also shown at the end of season four). The storyline with the five year jump into the future I think might have hurt the show a little. I think I liked it better with the way it was. It’s obvious that “Desperate Housewives” creator Marc Cherry wanted to make some changes so that way the show can stay fresh. Not a bad idea, but for me changes don’t always cut it.

As for which episodes were the best, I’d have to say the very best episode of season five was the show’s 100th episode, titled “The Best Thing That Could Have Ever Happened” (in the show’s fifth season, it’s episode #13). Here’s an episode that takes a total departure from its regular storyline to focus on Wisteria Lane’s local handyman, wonderfully played by Beau Bridges. The handyman dies of a heart attack at the beginning of the episode, and the ladies flashback on how this man affected their lives over the years. Bridges’ guest appearence provided “Desperate Housewives” with one of its only two Emmy nominations that it received this year. Another good episode was #8: “City on Fire”. This was supposed to be the big episode of the season, following on the heals of the tornado episode from season four and the supermarket hostage crisis episode from season three, which rank as the two best episodes of the show so far. In this episode, a nightclub fire puts the housewives and their husbands in danger.

The DVD is loaded with bloopers and deleted scenes. Plus, you get a look at a rathe funny table read and the show’s build to the 100th episode. Series creator Marc Cherry shows up to discuss his favorite moments. Then, there’s a look at Teri Hatcher’s time on Wisteria Lane. Throw on some commentaries and amazing A/V Quality for a well-rounded DVD package. Therefore, I recommend it as a rental.