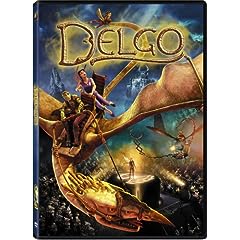 When a forgotten enemy returns, the fate of the world lies with a spirited princess and an unlikely hero. Take an exciting journey to a spectacular realm of magic, fantasy, romance, and adventure.

In an exotic divided land, Delgo, an adventurous dreamer but naive teenager, must rally his group of troubled youth and some unlikely friends to protect their world from conflict between the terrestrial Lockni people, who harness the mysteries of the land. And the winged Nohrin people, who rule the skies. They live – segregated – in an uneasy peace until Delgo was framed for a crime he did not commit. After enlisting the help of a unlikely friend to escape a Nohri prison, Delgo discovers Imhoff is in danger so he must unite the two races against a common foe.

The land of Jhamora is torn apart by the mutual prejudice of two peoples -the winged Nohrin, masters of the skies, and the terrestrial Lockni, who harness the mystical powers of the land. When Delgo (Freddie Prinze, Jr.), a reckless Lockni teenager, forms an outlawed friendship with the spunky Nohrin Princess Kyla (Jennifer Love Hewitt), hostilities between the two peoples escalate, setting the stage for an exiled Empress Sedessa (Ann Bancroft) to exact her revenge and reclaim her rule.
Falsely imprisoned, Delgo and his faint-hearted best friend, Filo , must put aside their differences to join forces with a sworn enemy and travel to the mysterious land of Perran, where they discover more than just a scorned Empress and her two bumbling servants.

The film is total weaksauce. It plays so fast and loose with plot that it reminds me of the proliferation of early to mid 1980s Disney knock-off films. You know the ones that came out in that pre-musical empire Disney glut. Stuff like poor dubs of Little Nemo, Warriors of the Wind and Pinocchio and the Emperor of the Night. The A/V Quality was amazing, but it should be for computer animation.

The DVD is packed with featurettes, deleted scenes and various commentaries. None of them really do anything to explain away the lackluster nature of the film. Sure, the A/V Quality is strong as hell for a DVD that didn’t really receive any big promotion. But, it’s such an odd animated film that I can see it becoming a cult hit in the future. Reference audio quality though, so pay attention to the few big fight scenes. It’ll give you speakers a workout. I recommend a rental.