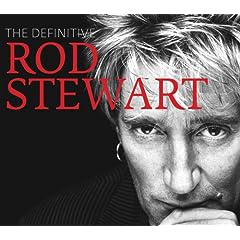 The 2008 Definitive Rod Stewart is a double album reflection of Rod’s biggest rock staples throughout his eras with Mercury and Warner Brothers in the 70’s, 80’s and 90’s. The double album includes a lot of Rod’s hard core staples that have withstood the test of time, and are still enjoyable to listen to after all these years. The songs have all been remastered well, and includes his biggest staples including Do Ya’ Think I’m Sexy, the definitive and youthful Forever Young, to his best moments of the 80’s and 90’s like Some Guys Have All the Luck, and Reason To believe which brought fans to their knees from his 1993 performance on MTV Unplugged. While the double album fares well, what really surprises me is the DVD too, which includes off-shoots and lesser-known tracks that could’ve had the light of day on the album like the overlooked Ooh La La and If We Fall In Love Tonight. Not only that is a disadvatage, but I was also hoping that on the DVD there was also videos of his hits Forever Young and the colorfully animated The Motown Song. Not only that. but the album does overlook a few staples Rod had recorded as well as it were his own including Broken Arrow and Lost In You.

The first disc is by far the better if only for the more intense nature of Stewart’s material, starting with the gloriously gravely “Maggie May,” moaning on to the crunching guitars of “Every Picture Tells a Story” and the bawdy brawler “You Wear It Well.” His time in Faces is represented with the iconic “Stay With Me,” while the well preserved “The First Cut Is the Deepest” sounds just as fresh as Sheryl Crow’s version three decades later. Rock purists could easily dismiss the disco decadence of “Da Ya Think I’m Sexy?,” but it was a major single and needs to be included for historical sake.

Disc two starts off a little bit dated with the 80s dance cut “Tonight I’m Yours (Don’t Hurt Me)” and a keyboard-infused cover of “Some Guys Have All the Luck.” Thankfully it rebounds with the Tom Waits-penned classic “Downtown Train” and Stewart’s own signature song “Forever Young. An unplugged take on “an Morrison’s “Have I Told You Lately” is also a key career cut, though his reunion with Ronnie Wood on the acoustic “Reason To Believe” is truly the highlight of the second half. The project ends with the unreleased track “Two Shades of Blue,” an elegant ballad taken from 1998’s When We Were the New Boys sessions that adds an extra incentive to this one stop shop of Rod the Mod’s most memorable moments.

The CD is a decent album, but it lacks coherence. There are large gaps between his mid 80s resurgence and the later work. I’m not sure if it was his reliance on standards or legal tie-ups that kept a lot of tracks from appearing. Hell, I noticed it with the videos selected on the DVD. What went on here? We didn’t get the Definitive Rod Stewart. We got the almost complete Rod Stewart.