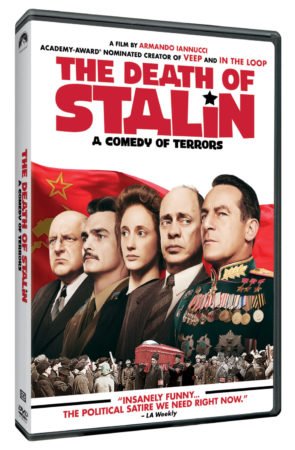 THE DEATH OF STALIN REVIEWED

“The Death of Stalin” mixes about 30% fiction with a ton of truth. Still, it’s weird to find the comedy in how the Russian government handled the death of Stalin. For a leader with no replacement strategy, he almost willed the nation into believing that he’d live forever. So, when it came time for Khrushchev to take over, people fought. Armando Iannucci continues his recent streak of political comedy by showing how even totalitarian regimes fall apart when faced with petty drama.

Plus, this has to be the first real comedic performance from Michael Palin in ages. Sure, he’s being doing TV and light roles here and there. The entire performance as Molotov made me realize how much I miss the once and future Python. Your enjoyment of the film will stem from your enjoyment of political history. If you know how much of this is real including the contest performance redo, then this will be pleasantly odd to see staged onscreen.

I know that we still have a few Russian readers, so I will say this. It’s Region 1 DVD, but nearly every country has unlockable players. Pick this one up and sneak it in. All governments deserve to be ridiculed.