Summary
Cult Epics is proud to present DEATH LAID AN EGG (1968), directed by auteur filmmaker Giulio Questi (DJANGO KILL!, ARCANA) and starring legendary leading man Jean-Louis Trintignant (THE CONFORMIST) as a married man and suspected serial killer, Gina Lollobrigida (BEAT THE DEVIL) as his delectable yet overly domineering careerist wife, and Swedish blonde bombshell Ewa Aulin (CANDY) as his murderous double-crossing mistress in this mystery thriller. DEATH LAID AN EGG is an avant-garde giallo that is more pertinent today than when it was first released in terms of its quite modern depiction of the battle of the sexes and the perils of technology. This Special Edition includes the Director’s cut, alongside the alternate International giallo “Plucked” version, both in fully restored 2K HD transfers, with completely new bonus features and limited edition slipcase printed with fluorescent inks to emulate the original theatrical poster.
Good
8.3
Great
Video - 8.2
Audio - 8
Movie - 7.8
Special Features - 9

Death Laid An Egg is getting a proper release from Cult Epics. While this Italian thriller might not be known to a lot of Americans, you’ll find the setup very familiar. Jean-Louis Trintignant plays a man who married Gina Lollobrigida to get at her sweet chicken farm money. The murder plot builds, as the B plot arises about a chicken being made without a head or wings. This disgusts Trintignant who uses this to motivate himself to continue his murderous plans.

Director Giulio Questi made his first Giallo movie into quite the oddball entry. He’s equally fascinated by the murder plans as well as the sexy live-in secretary that occupies Lollobrigdia and Trintignant’s attention. If that wasn’t enough to keep your attention, there is also a slight S&M style send-up if the local area’s elite. Basically, they all go to a roadside location to paddle and boink each other until they become fulfilled.

I like the energy of what they’re laying down, but Death Laid An Egg is very indicative of the time and place it was made. Questi made a Django movie that I enjoyed. But, I can’t say the man has given me any reason to check out the rest of his work. It’s one thing to make something trippy, it’s another to make something that is coherent. Hold for a moment, as I can already hear the Giallo fans getting upset.

Death Laid An Egg has a small, but significant fanbase. Cult Epics is doing the world a favor by preparing Death Laid An Egg for a Blu-ray release. But, that doesn’t make the movie any more comprehensible. We live in an era where only the major films get stellar releases and every other smaller film has to line up for attention from the niche labels. When you release one movie, there are scores of fans crying out for another title. Just ask Banana Bill about our demands for DA FAHMAH.

Honestly, the more I watch films like Death Laid An Egg…the more I see why I can’t fully commit to being a Giallo fan. Maybe it’s because I’m a basic film bitch, but I need the basic narrative constructs to enjoy. Surreal images, dream like states and other junk left my area of enjoyment when I was 17. Am I saying that surreal enjoyment is tied to a teenage like enjoyment of druggy delights? No. But, the people who really get into that stuff tend to be the same kind of people that really enjoy Spencer’s Gifts.

By that rationale, I’m effectively crapping on this kind of filmmaking. Well, that’s a 50/50 split. I enjoyed Questi’s take on Django because it lends itself to the surreal nature of a Western. But, when trying to make the modern mundane into something weird…it creates this weird paradigm. If you know how something is supposed to be and how it relates to the world, then the surreal effect collapses.

This is the point where you sarcastically ask me to explain myself about Death Laid An Egg. Here goes. Reality on film is the most well-crafted façade known to man. A well-crafted lie designed to trick and force the audience into accepting whatever the narrative asks of them. Nothing is wrong with Jaws, as Amity Beach looks like it could entice a New England summer crowd. But, it’s designed that way to make us accept a giant shark making its way that far north and inland.

Death Laid An Egg fails this test not because of the sexual romps, the married couple cheating on each other or even the mutant chicken. The film fails the reality test because it asks us to accept all three ideas without a moment of reality created to grind this all into place. When it’s a Django western, we buy from the franchise conceit that we’re going to see something that might be weird. A western on its face is a known narrative lie that we accept.

Modern tales of sex and violence asks us to accept that this could be happening behind closed doors in your community. People are perverts when given to their base desires. But, are they doing a variety of creepy things at once or trying to maintain the one weird thing they do? Not everyone is Rob Ford, most are people that are struggling to live down the one off-kilter thing they can pull off.

It’s implied that Jean-Louis Trintignant is playing the lead as a suspected serial killer. Even with what the narrative gives us, I don’t know if I totally buy that. A psycho is a psycho, but when is a pervert not a psycho? When he’s a grown man doing his best to advance, but keep his secrets private. In that sense, Trintignant is given more to do than Lollobrigida throughout Death Laid An Egg.

But, both are asked to act in a Giallo that is trying its hardest not to commit to being a Giallo. Creative talent that experiments with genre always entertains me to a certain degree. But, I’ve watched this movie four times now and I can’t tell you exactly what I like about Death Laid An Egg. In a way, it makes me wonder what Siskel and Ebert in their utmost 80s piousness would have made of Death Laid An Egg.

Critical response is a fascinating thing when measured across history. As taste and culture changes, what an audience is willing to accept grows and evolves into a wide variety of things. Yet nobody asks if the films changing our tastes are any good. Have you watched the I Am Curious movies recently? What about a recent offering like A Serbian Film? They are interesting creative jaunts, but are they good?

Push comes to shove; I’m going to side with a strong No. Artistic endeavors in the visual medium require filmmakers to show not tell. But, what happens when what is shown needs someone to tell what they were trying to achieve? There are the cinema snobs that will argue if it needs to be explained, then you didn’t get it. Well, there is some truth there.

But, the rub is that if you can’t adequately inform an audience via visuals…then you failed in a way. I can already feel the hate comments coming at me. You know in your soul that I’m right. So much of what we find cool are things that we wouldn’t tolerate in narratives we didn’t dig. Whether it’s a film having a double opening vs. allowing genre trash due to loving fill in the blank major franchise, we make concessions for the things we like.

It’s a fault of audiences that cult films have a tendency to explore and exploit. What is a charming quirk in a Corman film or something HG Lewis did will end your world if you see it in a modern Disney movie. The mistake is the same, it’s just that audiences and hardcore film fans ranks imperfections with different degrees of harshness. That’s not a bad thing; it just speaks to the subjective nature of human experience.

When certain people watch things, much like with their outside entertainment…they want to win and be right. Sports mentality and competition has significantly destroyed a lot of how people view things. It’s OK that Death Laid An Egg isn’t perfect and tries for more than it achieved. But, like most things…you need to know when to get off the ride. What does that mean?

The ride analogy is something I’ve been thinking about for most of 2020. How people experience entertainment is split between amusement, artistic enjoyment and time wasting. When we watch something, our threshold for how we experience something varies wildly in each arena. If it gets too low, we bail out. When it gets too high, some of us hop on Twitter and declare Product X to be the best thing ever.

Human nature is something I thought about a lot while watching Death Laid An Egg. The Italian cultural mindset in the 1970s is as far removed from modern Western takes as you can get. What’s funny is that I’m saying that after debating the merits of Amazon society vs. Reagan era Americana. If you can buy into one, then you can accept that people in 1968-1970 were into banging each other for recreation. That goes back to the thresholds I discussed.

If you are the kind of viewer that can’t handle a lot of oddballs or narrative tweaks, then Death Laid An Egg might not do it for you. Comparing this disc vs. the last release from Cult Epics shows that this one has way more bonus material. It’s been three years and I think that disc was tied into a fundraising effort. I’m getting old and my memory on super niche details is getting shaky. So, correct me if I’m wrong about that one.

Does it matter? Not really. But, what matters is that anyone slightly interested in checking this one out gives it a shot. Check out the Death Laid An Egg screenshots included in the review to get an idea of what it looks like. If enough people ask, we might do a comparison between the 2020 and 2017 Death Laid An Egg Blu-rays. Hit me up, if that sounds like something you want me to do.

The Death Laid An Egg Blu-ray comes loaded from Cult Epics. You get the 2K HD transfer sourced from the original 35mm negative. Plus, it’s the Director’s Cut made available in English and Italian! You get a commentary, featurettes and interviews. There’s a slipcover for the people that dig that sort of thing. Act fast as it’s limited to the first 2000 copies. I’d recommend a purchase to Giallo completists.

Death Laid An Egg is now available from Cult Epics

Death Laid An Egg is getting a proper release from Cult Epics. While this Italian thriller might not be known to a lot of Americans, you’ll find the setup very familiar. Jean-Louis Trintignant plays a man who married Gina Lollobrigida to g...
0
Average User Rating
0 votes
Have Your Say!
Your Rating: 0
Submit
Write A Review
Genre:Giallo, Mystery, Thriller
Rating:Not Rated
Director:Giulio Questi
Studio:Cult Epics 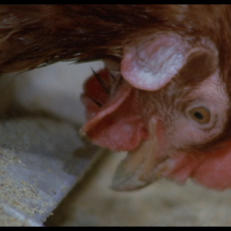 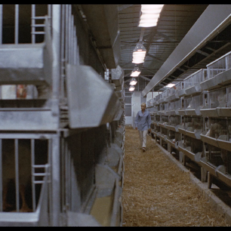 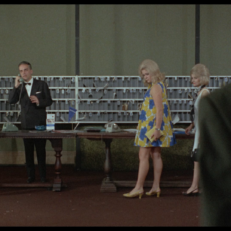 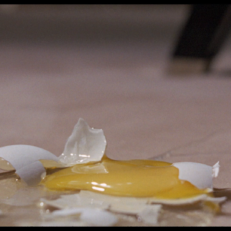 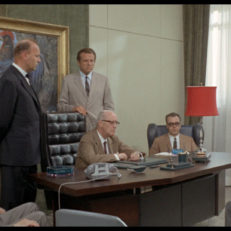 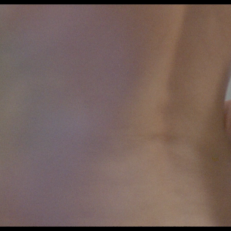 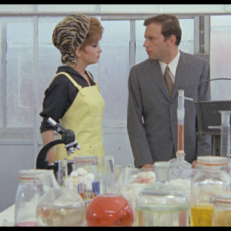 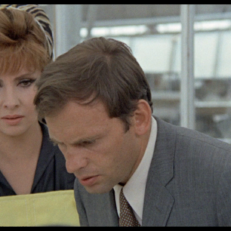