Crossfire is a fascinating film to study as part of the Post World War II experience. Developed as a novel by a Sergeant making training films at Camp Pendleton, the source novel had more teeth to it. But, a maturing Hollywood wasn’t ready to make that story. The novel The Brick Foxhole was about a group of soldiers murdering a homosexual soldier and trying to cover up the crime. Given that America wasn’t ready for that kind of heat yet, they went with a topic safe for 1947. That’s right, Antisemitism.

Gentleman’s Agreement was months away from winning Best Picture at the Academy Awards, but the topic of Antisemitism was already gathering heat. While the nature of the war crimes committed by the Nazi machine wasn’t that well known to the American public of 1947, many returning veterans were traumatized by what they seen. Some became better men, others kept reinforcing the same Country Club nonsense from before the War. What was different was American seemed willing to discuss the issue after thousands of veterans came face to face with where such hatred leads.

However, how do you tell a tale like that on a RKO budget? Given that it was 1947, the bar was pretty low. It’s not like you’re going to have small segments of social media scrutinizing every single route you take. After all, the same people who yell at just now discovering that Eminem existed in the early 00s. So, it’s going to be hard to get them to care about how a B movie handled Jewish American relations in the 1940s.

Murder mysteries within the US Military are commonplace now. However, adding a charged social issue to the mix was still pretty novel. Given that America and most of the world was still reeling from World War II, moving away from outright propaganda was slow for Hollywood. Most of the newer dramas were about how to acclimate back to civilian life instead of glamorizing the War. But, how do you sell adult drama to a populace that had become used to the wartime life?

You sell them a crime story about what they know. What’s pretty fascinating is how Crossfire uses flashbacks in a way that predates Rashomon, but not the original Akutagawa story. Various crime films of the Hollywood Golden Age played with memory and how people hid events. But, very few American movies dared to show American military men with the same light as the common criminal. You can count the amount of movies on one hand that showed the military system trying to cover up such things.

Robert Mitchum does his best to investigate the case, but he’s protecting his men in Crossfire. Mitchum isn’t playing an outright villain, but a man that loves the system that allowed this crime to happen. While that doesn’t make him a hero, it makes sympathetic as an outsider trying to understand something beyond his life experience. Then, there is Robert Ryan. When you tackle heavy subject matter, it benefits an audience of this time to paint the villain in a certain light.

Ambiguity rarely wins over a mainstream audience, so it helped to show off Robert Ryan as pure evil. As he moves among the soldiers clearing up loose ends, one has to wonder how 1947 audiences saw Crossfire. American Armed Forces allowed the movie to be shown on bases, but Crossfire was forbidden to be shown on bases overseas for years. On the PR and morale side, it’s not fun to show off a movie that highlights how easy it is for major crimes to happen within this man’s Army.

Director Edward Dmytyrk is famous for being part of the Hollywood Ten. While he directed Crossfire before his trouble with HUAC, the promising director only survived that bullshit hailstorm due to the intervention of Independent Producer Stanley Kramer. While it’s fashionable to dump on Kramer for being a melodramatic director, his work in stifling the Blacklist is second-to-none. Sure, message movies are just annoying today as they were then, but you have to admire people of conviction.

The grand takeaway from Crossfire is that the movie to antisemitism didn’t pack the same sting as a bunch of military man killing a young homosexual. Even in the late 1940s, Jewish people in high status American life weren’t facing the same struggles as homosexuals. Sure, life sucked and the WASPs crapped on everyone and pioneered prehistoric White Flight in response. It’s just that a military murder cover-up hits different when changing the target.

Carol director Todd Haynes was trying to direct a remake of the book rather than the 1947 film for ages. However, who knows if that will ever get off the ground after the Pandemic? I think a modern take could do wonders to this story, as so much of what we got was a compromise to tackle an issue of the day. While Gentleman’s Agreement tackled the issue in how it would naturally exist, Crossfire takes to an insane degree. It could happen, but how often had it?

Widely considered to be the first B movie to get a Best Picture nomination, Crossfire was as revolutionary as it wasn’t. Dmytryk took the scraps and compromises he was given to cobble a revolutionary take, but was it enough? The Academy didn’t think so and gave Best Picture to Gentleman’s Agreement. The mainstream studio take vs. the B-movie powerhouse tackling the same issue and Hollywood said they favored Peck. There’s a lot going on there, but it’s an argument for another time.

Warner Archive brings Crossfire to Blu-ray with probably one of the more fascinating Classic Film commentaries I’ve heard in 2021. Silver and Ursini talk about issues I discussed here, but the audio interviews from the departed Dmytryk only helped things out. Plus, you get a featurette about the film. The A/V Quality is gorgeous. But, I’ve come to expect seeing stunning 1080p transfers and crisp DTS-HD master tracks from Warner Archive. Classic cinema needs friends like this.

Fans can purchase Crossfire at www.wbshop.com/warnerarchive or online retailers where DVDs and Blu-rays® are sold

Crossfire is a fascinating film to study as part of the Post World War II experience. Developed as a novel by a Sergeant making training films at Camp Pendleton, the source novel had more teeth to it. But, a maturing Hollywood wasn't ready...
0
Average User Rating
0 votes
Have Your Say!
Your Rating: 0
Submit
Write A Review
Genre:Drama
Rating:Not Rated
Director:Edward Dmytryk
Studio:RKO Radio Pictures 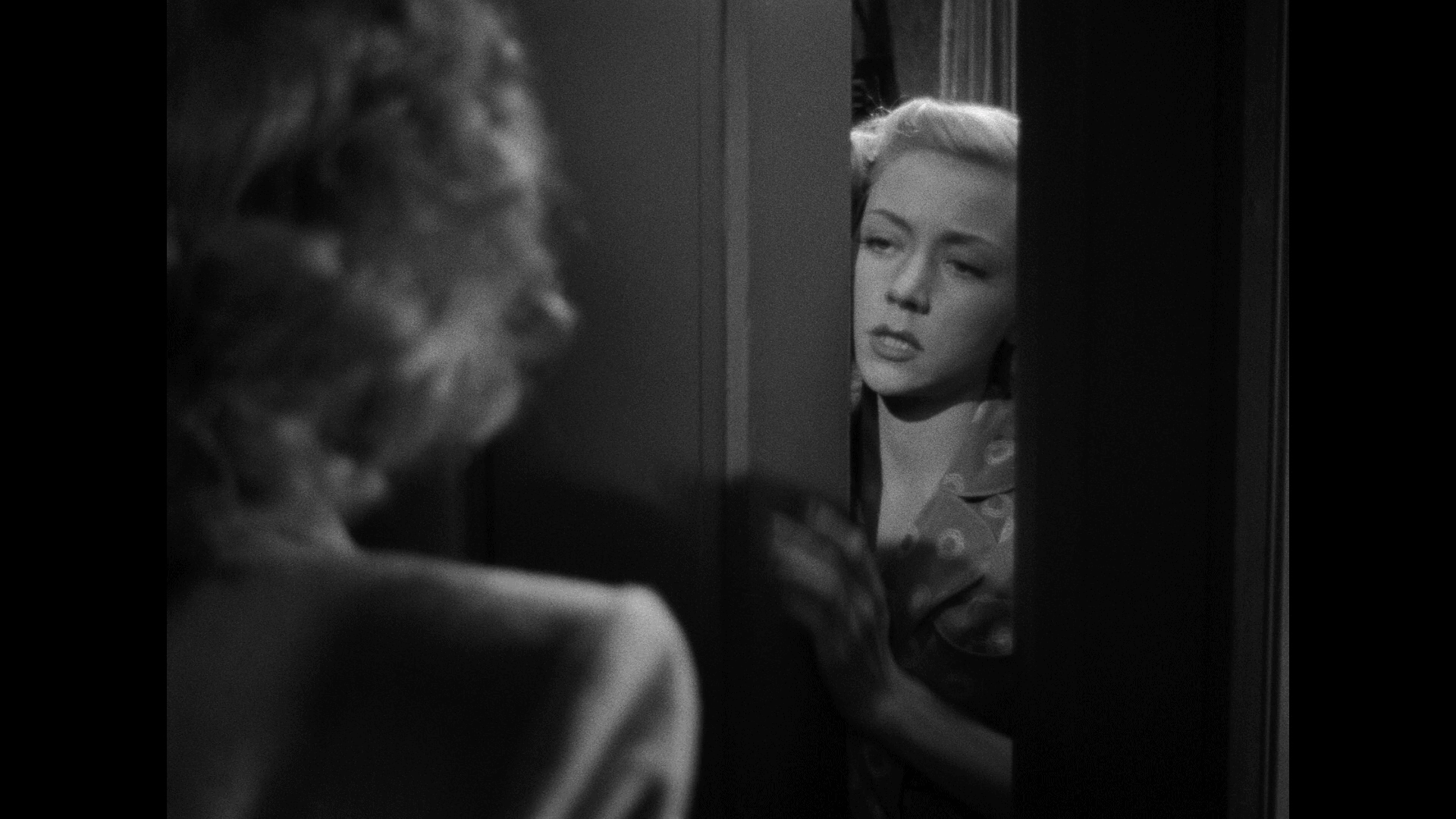 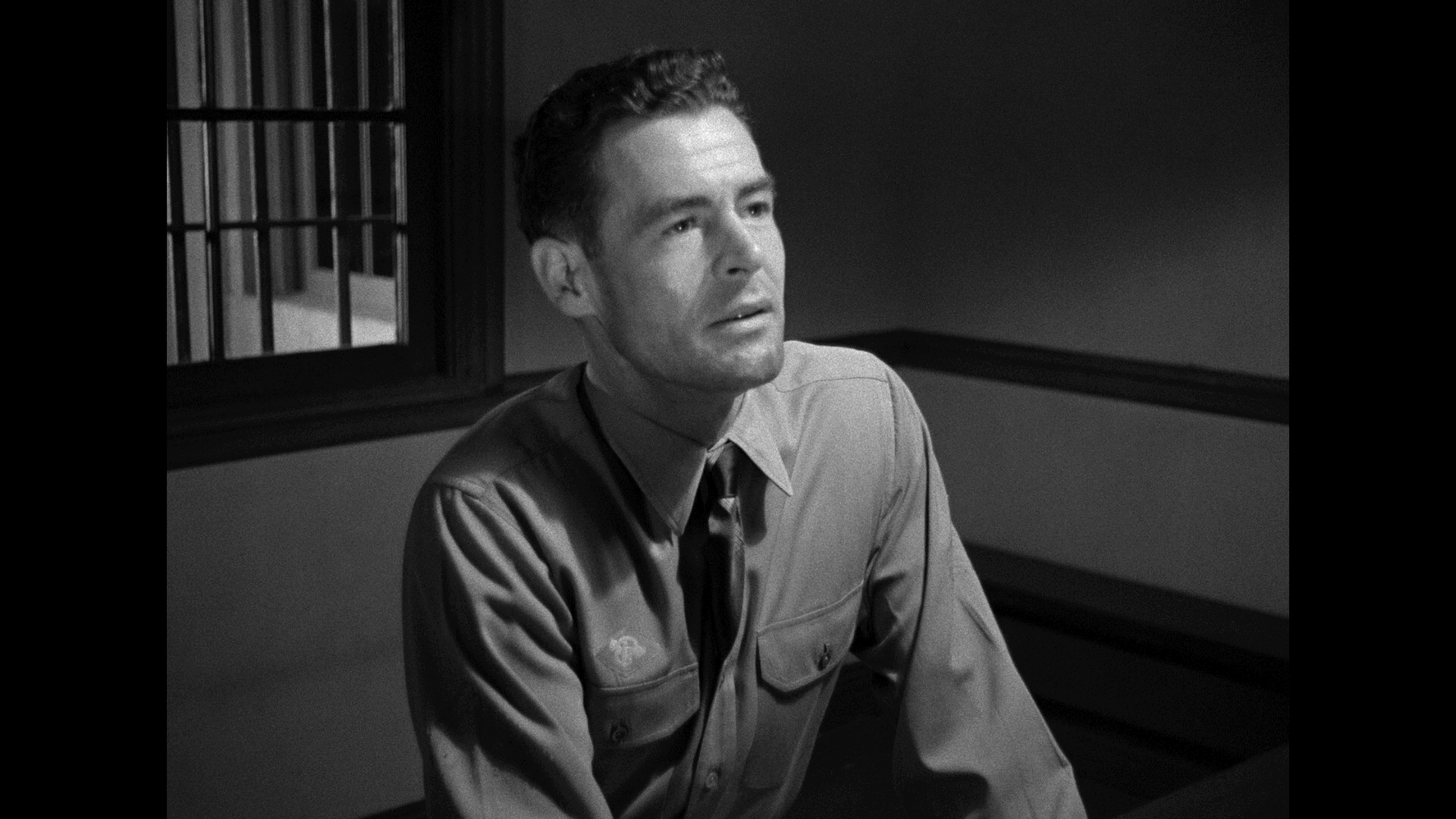 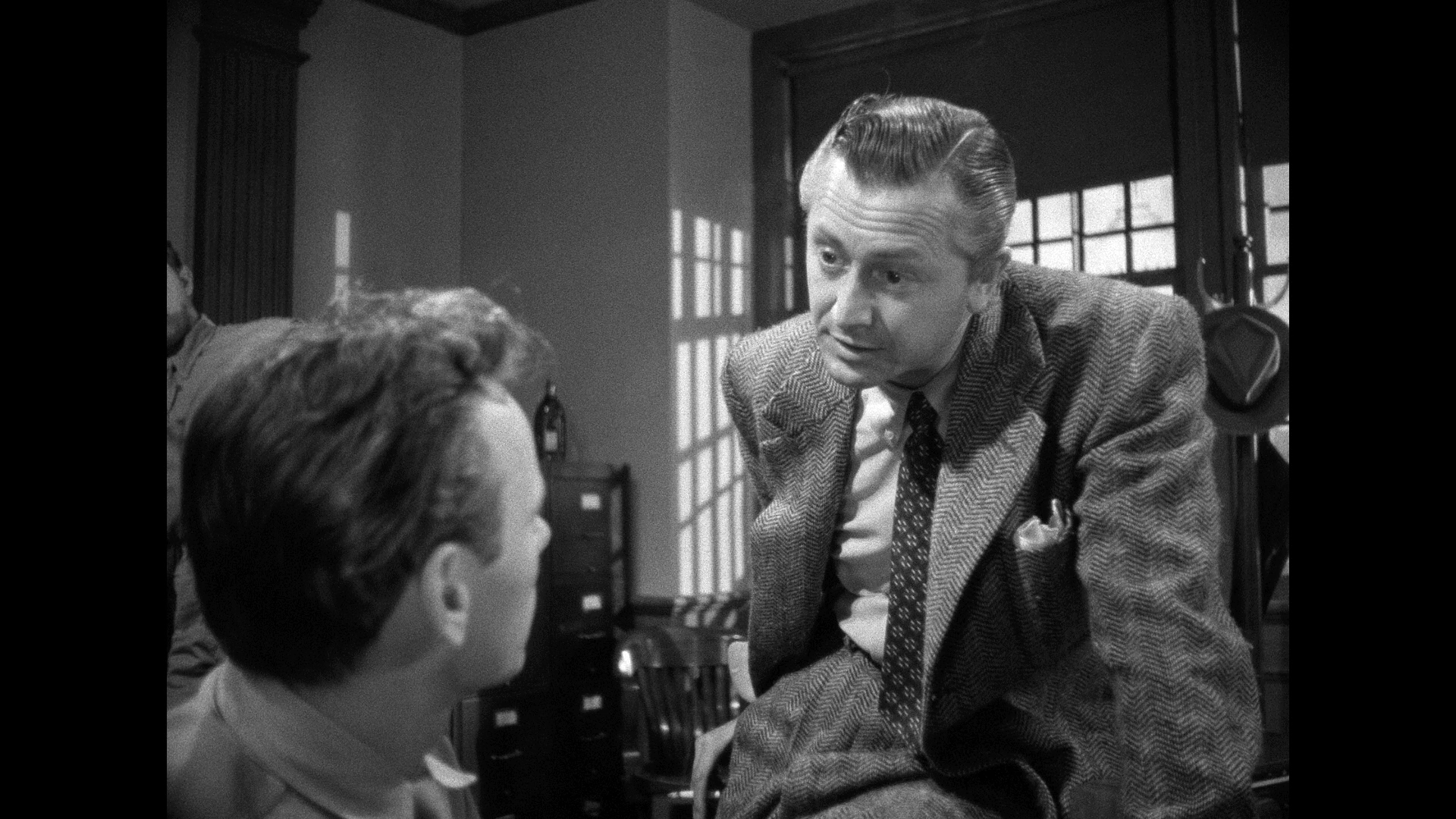 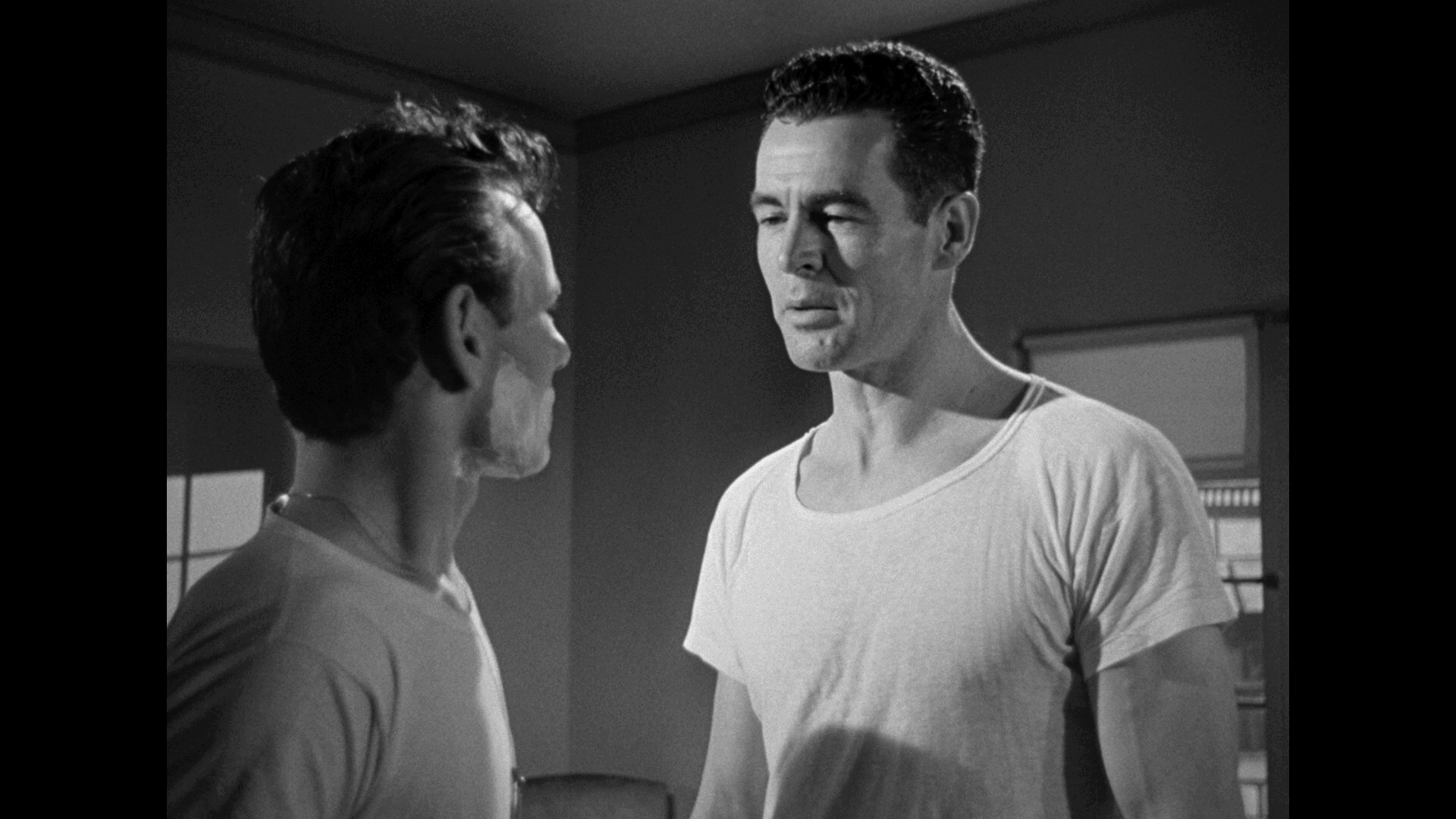 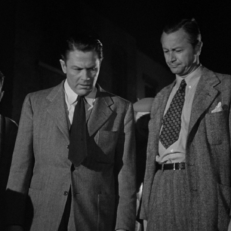 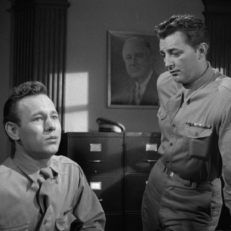 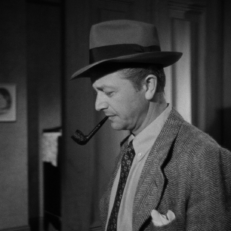 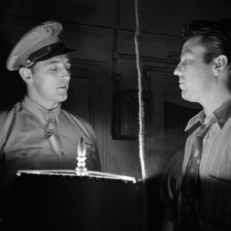