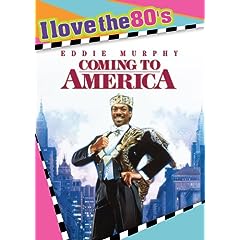 Half of the characters in this 1988 John Landis potboiler seem to be played either by Eddie Murphy or costar Arsenio Hall, swaddled in elaborate Rick Baker makeup appliances that render them unrecognizable but also weirdly immobile. As a pampered African prince who journeys incognito to Queens, New York, to find a bride who will love him just for himself, Murphy manages to look smug and naive at the same time. There are enjoyable sequences of Murphy’s Prince Akeem applying his lordly manner to his new job in a fast-food emporium, and falling for the boss’s spirited daughter (Shari Headley), who teaches him how to party down, American style. But the fish-out-water premise is never fully exploited. Star spotters will have a field day locating Cuba Gooding Jr., Donna Summer, Louie Anderson, Vondie Curtis Hall, E.R.‘s Eriq La Salle, and Samuel L. Jackson in their minuscule supporting roles.

Prince Akeem (Murphy), heir to the throne of Zamunda, has had it with his cushy life. Dude strolls on carpets of rose petals flung by beautiful servant women (who also clean his ding dong). He’s serenaded awake by a live orchestra. He has minions brushing his teeth for him. And he’s tired of all this.
It is Prince Akeem’s 21st birthday, and the king had already arranged his marriage. Akeem at last rebels and, to pacify him, the king grants him forty days to go sow his wild oats. And then the marriage will go on.

But Akeem has other ideas. He intends to go looking for his own bride. But where can one find a woman of wit, grace, and culture, someone fit to be a queen? Where else but in Queens, New York?

The movie really takes off once Akeem and his friend Semmi (Hall) land in the seamy side of Queens, as they confront a shockingly different culture. Because Akeem longs to learn what real life is like, he and Semmi pass themselves off as lowly foreign students, rent the rattiest room in the ‘hood, and gain bottom-barrelled employment at McDowell’s, a fast food franchise eerily resembling another, more famous franchise. And, there, Akeem meets Lisa.

The DVD is as commonplace as my dislike of Canada. The same special features have been ported over from the previous DVDs. The A/V Quality is the same and nothing else has improved. But, you get a CD sampler with Erasure on it. You remember Erasure, don’t you?