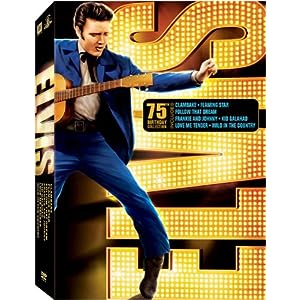 The heir to an oil fortune trades places with a water-ski instructor at a Florida hotel to see if girls will like him for himself, rather than his father’s money.

Elvis Presley plays a wealthy racing enthusiast who switches places with poor water skiing instructor. He wants to make it “on his own” and see if he can attract women without money. As the film opens, Elvis trades places with pal Will Hutchins, who plays the lowly ski instructor; and, they sing the duet “Who Needs Money”. Watch it – the unprofessional singer, Mr. Hutchins, sings the song as well as Elvis! Hutchins, Shelley Fabares, and Bill Bixby are okay; Elvis is the liability in his own movie. Hutchins, Fabares, and Bixby might have made a better film without “The King”.

Presley’s considerable charisma is put to the test here as he slogs through a pretty hackneyed and silly plot line. Though he couldn’t be considered “fat”, he has carbface and just generally doesn’t look good. His complexion seems wan, his eyes rather hollow and his hair is the messiest and most unkempt that he probably ever let it be in any other film. All Presley movies feature songs that are bland and indistinguishable from each other except to his most avid fans, but the ones here are particularly resistible. He does get a somewhat fun song in the ski shop and another one at the title occasion, but there’s one in a playground that is legendarily bad. Fabares (dipping into Pamela Tiffin’s area of expertise and appearance) is lovely to look at with her thick, attractive fall and her wardrobe of kicky 60’s clothes.

The Elvis 75th Anniversary Collection DVD package doesn’t contain any extra special features. The A/V Quality is pretty sharp, but it’s nowhere near HD quality. Hell, I’d go so far as to call it a repackage of the past release. If you already have that DVD, then don’t upgrade. If you need some MGM Elvis in your life, then I’d recommend picking this up.