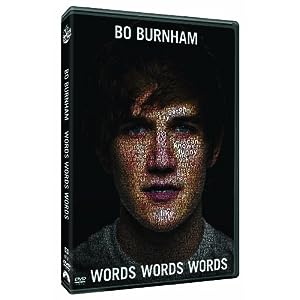 Bo Burnham is back with a new one-man show full of his patented songs and wordplay, as well as haikus, dramatic readings, blasphemy, and so much more in his first hour-long special, shot live in his home town of Boston.

I will give him this; he does have a good stage presence, he owns the stage and not only enjoys what hes doing but looks the part to. Comics twice his age have looked much more uncomfortable on much smaller stages. Also, he is a good piano player. And if nothing else, its impressive that some kid who put himself on YouTube made it this far. Having it being an hour long act his routine did seem to be running on a bit too long. After that first half hour, which is when I found him to be the funniest, the second half hour seemed to be dragging on to me. I was just wondering how much longer it was going to be.

The DVD comes with two music videos from Burnham. The A/V Quality is slightly better than the Comedy Central broadcast, but I was left wondering why the transfer seemed so muddy. It’s hard to whip out that many amazing live comedy performance DVDs, but this has the worst visuals of any Comedy Central DVD that I’ve seen this year. The Dolby audio track holds up for what it is, but there’s not a lot for it to do. In the end, I’d recommend it as a rental for casual comedy fans.