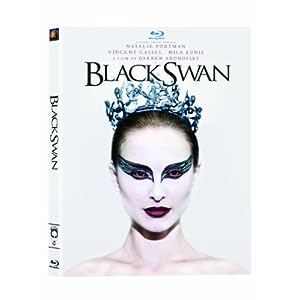 A ballet dancer wins the lead in “Swan Lake” and is perfect for the role of the delicate White Swan – Princess Odette – but slowly loses her mind as she becomes more and more like Odile, the Black Swan.

“Black Swan” is cut from the same cloth as Aronofsky’s 2008 film “The Wrestler,” if at the opposite end. Interestingly, before either project was realized, the director was reportedly mulling a drama about the relationship between a professional wrestler and a ballerina. Somewhere along the way, however, that concept was split down the middle—and thank God. “Black Swan” is brilliant, but it wouldn’t necessarily play well with others.
The visuals and editing are the drive of what helps make the film so well done. Contrasting blacks and whites so frequently give the obvious hints of good and evil, innocence and darkness. But Aronofsky likes to throw in hints of ambiguity at every turn, changing the colours for each character depending on the scene, and depending on what they may or may not be doing. Even the scenery and set design is in plain black and whites, always making the audience guess the true motivations and intentions of both character and creator. Adding in the element of reflection, both in others and the self (mostly through mirrors), only helps compound these feelings of ambiguity and confusion. It will consistently keep audiences thinking about what is being shown and what is actually going on. The subtle visual effects and astoundingly well done score only help add to the greatness.

Aronofsky also deserves recognition for the film’s lean running time. When so many films are often far too long and dragged out, this film maintains a sense of momentum that never gets lost at any point. The film’s slow points are never dragged out, merely well padded out for the shift from Nina being innocent to adrenaline soaked horror as she descends into the realm of darkness.

The Blu-Ray comes with a ton of featurettes and a behind-the-scenes documentary hosted by Darren Aronofsky. There’s some FOX Movie Channel material that helps to show how the script evolved over the last decade until it became this serious look into a deranged ballet. You even get Pocket Blu apps and a Digital Copy to take on the go. The A/V Quality shows a lot of grain on the transfer, but that’s typical for Aronofsky. In the end, I’d recommend a purchase.

0 0
Previous ArticleCHECK OUT THE POSTER FOR “THE IMPERIALISTS ARE STILL ALIVE”Next ArticleCHRONICLES OF NARNIA: VOYAGE OF THE DAWN TREADER