Big Dogs debuts on July 1st for Amazon Prime Video viewers. You can also watch it on Tubi, but I don’t know how many people are actually watching Tubi. Still, it’s the first thing I’ve seen Brett Cullen act in since Joker. I like Cullen, as he feels like the Bruce Li version of Alec Baldwin. You don’t get that a lot anymore.

Crime drama is always a mixed bag. Honestly, the last person to have a fresh take on the material was David Chase. Even by the end of his run, people were second guessing his choices. That being said, I like crime drama that goes dialogue heavy and plays with ideas. But, that’s all that Big Dogs offers audiences…ideas.

Moral ambiguity is the backbone of Big Dogs and the timing of a crime show like this couldn’t have been worse. Seeing as how law enforcement bending the rules is about as popular as ass cancer right now, a third of all audiences will bow out on this one just from synopsis alone. That’s a shame as I feel the show is well worth a viewing. It’s just that I don’t know if it’s ever going to have long term fans.

Ultimately, Big Dogs requires that an audience accepts a crime drama that takes newer ideas and dresses them in 90s cop drama trappings. Even with that, the show is such a brutal slow burn. If I didn’t feel obligated to finish the series, I would’ve tapped out at the halfway marker. It’s cool to go dialogue heavy for an episode or two, but this went way too long.

At worse, it’s a DTV vehicle with aging and never-been actors trying to create gritty cop drama. But, the best thing can be said is that they have nowhere to go but up by the next season. That is if Big Dogs even manages to get another bite at the apple.

Brett Cullen, Manny Perez and Michael Rabe star in the latest crime drama series. Big Dogs exists in an alternate reality of New York City. Businesses are shuttered, crime is rampant, black markets thrive. Drugs are run via taxis and detectives use taxis for undercover teams trying to rein in the chaos. 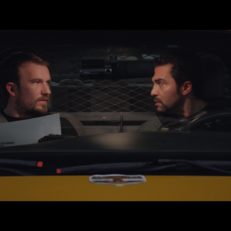