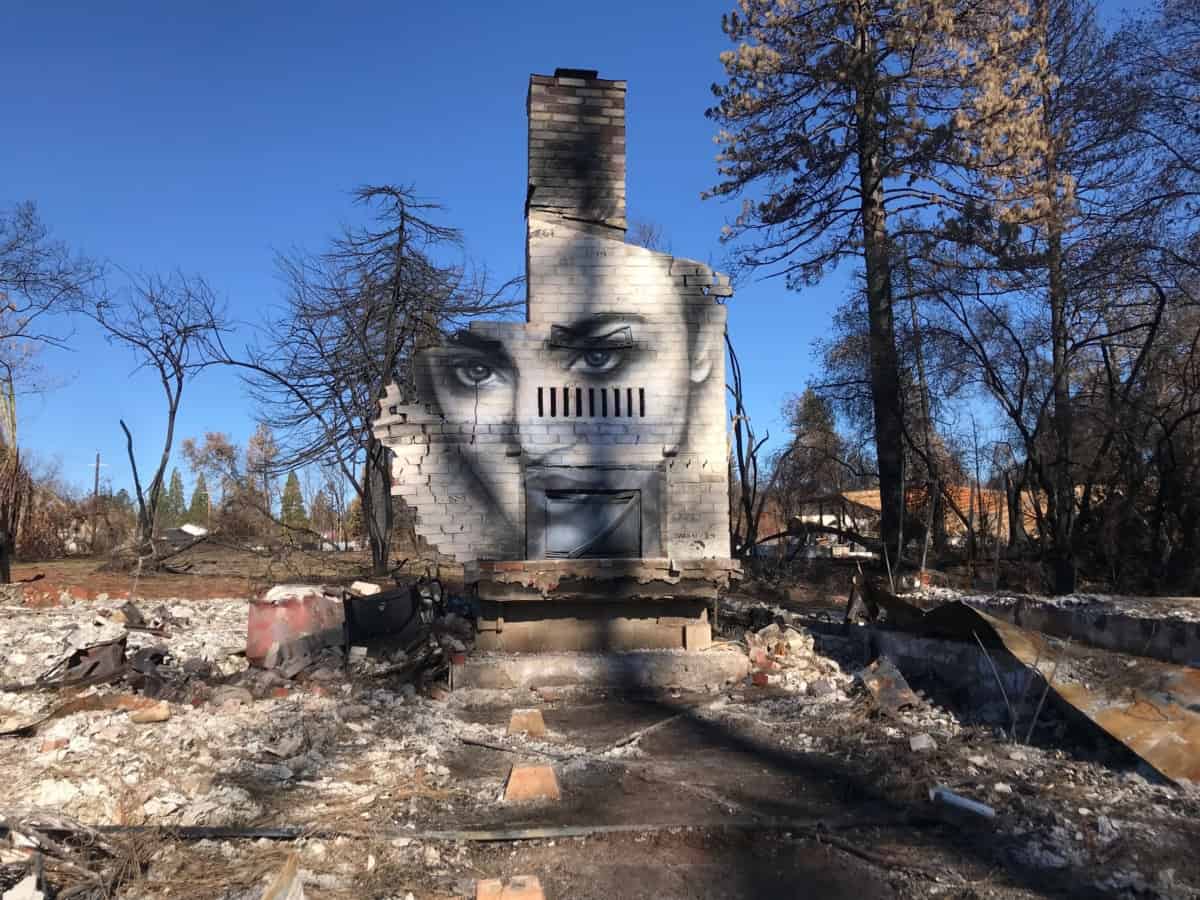 Beauty From the Ashes: Artist of Hope – Art and Stories from Paradise, California

The Paradise, California Camp Fire that destroyed an entire town in November, 2018 claimed nearly 19,000 buildings – mostly homes and dwellings – took the lives of over 80 civilians and ravaged over 240 square miles, causing more than 16.5 billion in damages. It went on record as the deadliest fire in California history, but beauty and hope did rise from ashes.

Self described artist of hope Shane Grammer, who grew up in Chico, California, which is about a 20-minute drive from Paradise, seized on an opportunity to paint murals amongst the ruins of Paradise, and his work is now being recognized worldwide because of it. Covered by media outlets CNN, The New York Times, and The Los Angeles Times, Grammer’s reputation as an artist of hope is growing. “Last year, I was trying to find a local place to do some work,” says Grammer, “and the fires happened up in Paradise. I didn’t really think anything of it until I started seeing friends I grew up with post videos of what was left of their homes on Facebook. I had family that lived there, and then it hit me hard. My friend Shane Edwards, who lived in Paradise, posted photos of the only thing left standing of his house: A chimney. When I saw that chimney, I knew that I had to paint it. Shane got back to me, and told me he would love to have me paint it, but I had to wait for the fires to subside.” 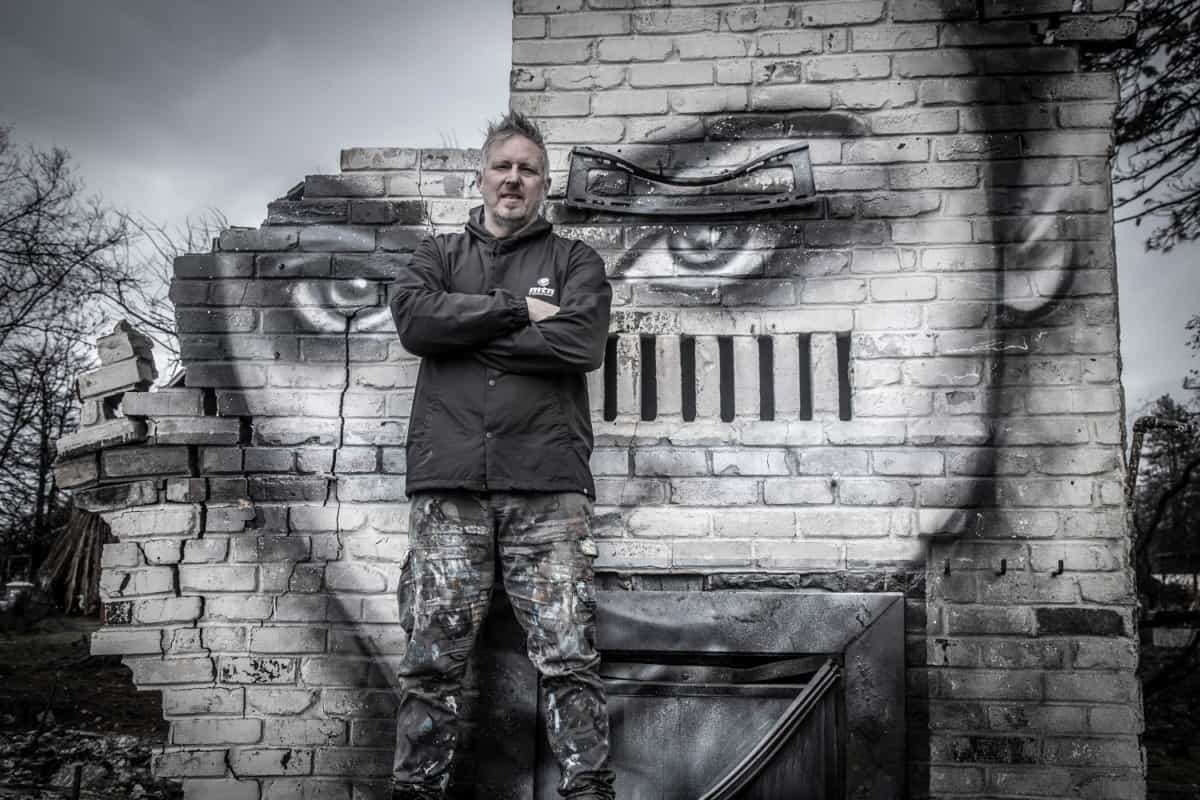 *All displayed Photos by Terence Duffy.

Grammer’s indelible first Paradise mural – which is part of his “The Bride” series that pays homage to the Song of Solomon from the Old Testament – became a symbol of not just a decimated town’s hope where over 90,000 people were forced to relocate, but of an artist’s yearning to create artwork that connected deeply and emotionally with an audience. Frontiers of ruined landscapes and non-traditional canvas on which he wishes to paint on are out there, and he’s searching for out-of-the-box projects to embark upon. “I want creative gigs,” Grammer states, “I want to continue to paint on unique surfaces. I’m inspired by people who paint murals in abandoned locations throughout the world. It’s not always about the prominent location in a downtown city. That’s great because it pays the bills, but what makes my heart beat is doing unique projects and painting beauty in the middle of destruction. If it’s anti-trafficking in Cambodia, to an abandoned location in Detroit, an art installation in the middle of an abandoned location in an industrial warehouse. I wanna sink my teeth into that.” He goes on to say that “Paradise ruined me, and it ruined me in many ways. I’d created artwork that connected with people emotionally in a deep way. Why can’t I do that again? I want to pursue projects that do that. I loved the surfaces I was painting on there. Burnt, broken walls, chimneys. I loved the textures and that they were out of the box, in the elements. I love that. I love that I had the freedom to do whatever I wanted. Of course I was going to paint from my “The Bride” series. The face of a beautiful woman’s portrait on a wall that was just destroyed. There’s something about that.”

Grammer’s intention as an artist is to find himself in a position where he can fulfill his dream of being in a position where he can move creatively without any parameters. “I’m working on pursuing projects where I have complete freedom to be creative and do unique projects,” he says. “I don’t want to be just a muralist. I have this amazing experience behind me with working with three-dimensional objects, sculpture, and I know so many people in this industry: I know lighting designers, video projection mapping, audio visual companies, scenic fabrication companies. I don’t have to build all that anymore. My goal is to attract projects where they come to me as the artist and then I design projects that I don’t have to fabricate anymore, package, ship, and install. Somebody else can do all that. But I can link it to my design and my creative force, and then I can bring in a team. I want to move into art instillation projects because that incorporates everything: dimension, lighting, sound, mural, and it can all come together to tell an immersive story and draw people in and connect with them emotionally. That’s where I’m going.”

Every artist has a style all their own, and Grammer’s touch is his vast experience in the field. “What makes me unique as an artist is my experience,” he declares. “I can do murals, I can paint, I can do sculptures – any type of sculpture – and I have design experience. I really believe that a project is only as good as its design. Design is the foundation. Because I know how to lead design teams, and how to execute an entire design process, that makes me unique. I don’t just throw a mural on a wall. I put a lot of thought into it.” As to his work in Paradise, he took a difference approach. “I never signed any of the murals in Paradise because I never wanted those murals to feel like murals. I wanted them to feel like they were part of the environment. I used transparent paint, transparent black and white because I didn’t want to lose the texture that was on the surface, the burnt paint, the burnt black from the flames or the rust. I wanted to feel like Hiroshima where the shadows were burnt into the walls from the blast.”

All the media attention and work that Grammer’s art in Paradise has been generating has led him to create a book that collects the images and stories he’s collected from the experience. It’s a gamble for him, but he feels it’s a necessary endeavor. “I’m taking a George Lucas approach with Star Wars. He just assumed that the movie was going to fail. So, for me, that takes a lot of the load off of me by just going to say I’m not going to make any money off of this book, but the mural project and the Paradise project were such amazing projects that I need to document it, and this book will do that. That’s #1: Documenting this project. The miracle of these projects is that these murals really did bring a lot of people hope and joy. People fall in my arms, weeping because the murals help them get up and get through their city – their town – that they lost. In that, I want to document all those stories, all of the stories, the process, and there’s still things happening because of that.”

Tentatively titled “Beauty From the Ashes: Stories and Art From Paradise,” Grammer’s hope for the book is that it will reach beyond the periphery of his growing following and those who are already familiar with the story of how it all happened. “I’m hoping that this book will give me creative freedom projects and open up the doors to large art installations around the world,” he states. “I do want to document this project. People need to see it and visualize it. A lot of these stories and how it connected with people needs to be remembered and communicated so that it can inspire other people in the future. I’ve got countless stories that this project has made them pick up their camera again, and start shooting photography, or videography, or even be an artist. This project being documented in this book can inspire people for generations.”