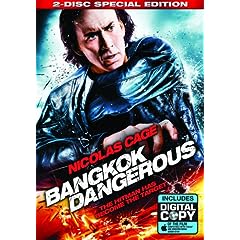 An adrenaline-charged action thriller, Lionsgate’s Bangkok Dangerous stars Nicolas Cage (Leaving Las Vegas, National Treasure) as “Joe,” an anonymous assassin takes an unexpected turn when he travels to Thailand to complete a series of contract killings. Joe (Nicolas Cage), a remorseless hitman, is in Bangkok to execute four enemies of a ruthless crime boss named Surat. He hires Kong (Shahkrit Yamnarm), a street punk and pickpocket, to run errands for him with the intention of covering his tracks by killing him at the end of the assignment. Strangely, Joe, the ultimate lone wolf, finds himself mentoring the young man instead whilst simultaneously being drawn into a tentative romance with a local shop girl. As he falls further under the sway of Bangkoks intoxicating beauty, Joe begins to question his isolated existence and let down his guard just as Surat decides its time to clean house. Directors The Pang Brothers (The Eye) paint an explosive picture of the Bangkok underworld, illuminated with neon and saturated in violence. From a screenplay by Jason Richman, Bangkok Dangerous is based on the Pang Brothers wildly popular Hong Kong action film of the same name. Starring alongside Cage are Shahkrit Yamnarm (Belly of the Beast), Charlie Young (Seven Swords), Panward Hemmanee and Dom Hetrakul (Sniper 3). The film is produced by Jason Shuman, William Sherak, Nicolas Cage and Norm Golightly. Andrew Pfeffer, Derek Dauchy, Denis OSullivan and Ben Waisbren serve as the executive producers.

Credibility stretched we find the hitman, Joe (Cage), in Thailand running jobs for some evil underworld types. Its Joes preferred method to hire a local low-level criminal and use them to help him, before killing them when he leaves. And so he finds Kong (Yamnarm), a pickpocket who reminds Joe of his younger self. When Kong falls in love with a dancer at a club, Joe begins to soften and finds love himself with a deaf/mute girl who shows him a caring side to his own character. Things inevitably turn nasty and even though Joe has been training Kong, he has to get his hands dirty and take care of business once more.

Im still struggling to understand Cages fascination with this film and this character. Not only that but why has he involved the Pang Brothers to direct the film? They bring nothing to the table, completely unoriginal and tedious in terms of the script AND direction. There a two moments when the film bursts into life with ultra-violence and then we get back to the same vacant stare from Cage as he does “contemplative”  which comes across as constipation.

The DVD feels so deflated after viewing the Blu-Ray. Sure, you get the same special features and digital copy. It’s just that you are lacking the 1080 bump that could arise casual interest in such a terrible film. Hardcore Asian cinema fans will hate this remake, but action fans will dig the flick and alternate ending. So, rent it and decide for yourself.