Summary
April Fool's Day didn't impress me. Let's talk about why as the pseudo horror film turns 35. Part of our Paramount Look Back Anniversary Series.
7.7
Good

April Fool’s Day is a film defined by its surprise ending. While the film continues to have fun to this day, I wanted to revisit it for its 35th anniversary. While I will have missed the Holiday by the time this goes live, you’ll learn to live with the disappointment. Much as I have lived with this film’s twist. The film fans I see breaking out the shock turn of April Fool’s Day leaves me confused. It’s terrible and everyone should understand why.

Horror works on a visceral response level. People have overstated other factors over the years. Some thought gore could replace horror, but it all leads back to the same place. Horror is to know what scares a person and scaring a person requires abject dismay. What can you do that makes some absolutely retreat from something? Back in the primal days, it was much easier.

Tribes of early humans scared of large animals, fire and falling to their death. Hell, that fear is entrenched in certain culture’s DNA. So, why is it that we all arrived in the last 120 years of horror entertainment and started picking apart things? Why can’t April Fool’s Day be true horror? The answer is as simple as it isn’t.

Deborah Foreman and Amy Steel are genre favorites, but even they can’t do enough to help out April Fool’s Day. It’s not their fault, as this film was a little ahead of its time. Now, I don’t want to draw parallels to Scream. I want to draw a line between this film and the scores of Scream clones that arrived winking to their audiences like they had a tic. Postmodern horror (horror post Night of the Living Dead) requires upping the ante. You can’t scare a new audience with something they saw in 1978.

Much like carnival barkers of old, directors and producers tripped over themselves to find the next great scare. Hell, April Fool’s Day producer Mancuso was a year or two away from sleeping bag deaths in the beloved Friday the 13th movies. Horror as a fundamental scare and visual platform requires the next big to-do as a way of capturing attention. Eventually, that reaches a point of diminishing returns.

Paramount altered April Fool’s Day from its original violent ending. While the whole prank murder scenario would have stayed, Muffy’s brother would’ve gone rogue and tried to kill her. A late inheritance plot twist and then the film would’ve earned its place among the Holiday themed gore romps. Instead it tried to go positive and stumbled over its feet.

April Fool’s Day as a film is built on the idea of staging a slasher movie scenario as a prank. Everyone buys into the material at the same time which is pretty far fetched. But, the whole film is this quick sprint to a finale that isn’t that smart. Basically, a semi-rich girl gets her pals to help her LARP Scooby Doo in order to gain status with her business idea.

This could’ve been a 22 minute show pilot rather than a film. But, it was the 1980s and probably the only time April Fool’s Day could’ve received a release. Name any other period where the Drive-In circuit would’ve had an audience for this. Hell, name any period in the early 90s where audiences would’ve put up with the horror movie that never quite came together.

There is a healthy fanbase for the film. But, April Fool’s Day will forever remain an acquired taste. I had a friend ages ago that called the movie “horror” for people that can’t stand a horror movie. To that I agree, but I also feel it’s dismissive of the overall work put into a film like this. It’s a noble effort, just a bad horror film.

Paramount has been helping us stage these Paramount Anniversary look backs at their films. Next up, we’re covering Gung-Ho and then we’re tackling the 25th Anniversary of Primal Fear. We had to take down our look at Beautiful Girls to fix something that got edited out. Give it a few days and it’ll return. Beyond that, check out April Fool’s Day if you’re curious. 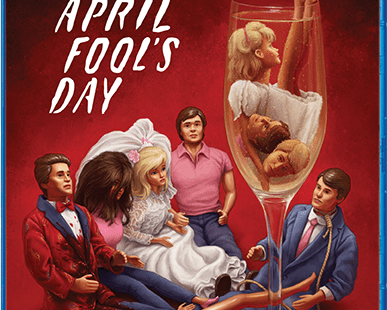 April Fool's Day is a film defined by its surprise ending. While the film continues to have fun to this day, I wanted to revisit it for its 35th anniversary. While I will have missed the Holiday by the time this goes live, you'll learn to ...
0
Average User Rating
0 votes
Have Your Say!
Your Rating: 0
Submit
Write A Review
Genre:Horror
Rating:R
Director:Fred Walton
Studio:Paramount