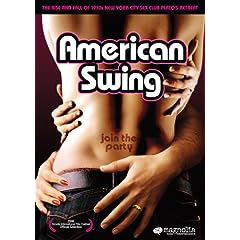 The Seventies were sexy and sleazy. At the epicenter of it all was Plato’s Retreat, the controversial, first-ever swingers club. In New York’s conservative Upper West Side, Plato’s embraced adventurous couples who came to dance, to swim, and… to swap. It was the start of a revolution. The brainchild of Larry Levenson, the self-proclaimed King of Swing, Plato’s Retreat quickly emerged as the mainstay of public sex for the me generation, welcoming anyone and everyone. For only $35, couples checked their judgments and pedigrees at the door; debutantes got it on next to bus drivers, as movie stars gave secretaries the starlet treatment. For Levenson and others, Plato’s was a utopia. However, this wild party did not last. American Swing brings this enigmatic epic of excess to the screen for the first time.

“American Swing” is full of ribald tales of what went down at Plato’s Retreat. It’s your typical documentary looking at the kind of fun that people had before AIDS ruined the party for everyone. You’ll thrill to a documentary with interviews ranging from Ed Koch to Ron Jeremy. Hell, it even goes out of its way to get political. Watch it with your mother!

The DVD is an amazing release that loads a ton of deleted scenes as supplemental material. There’s not a ton of extra insight into the material, but the A/V Quality is pretty sharp for a documentary. If you want to know the nudity count, it’s not as graphic as you would expect. But, it’s pretty fun to watch and it’s something that I would recommend for a rental. It’s just that most people won’t want to pick up a documentary about a sex club. Especially, one about a sex club populated by baby boomers.
RELEASE DATE: 04/14/09
UPDATED TO NEW SITE STANDARDS, SORRY THAT THE FONT IS STILL TRASHED.
Tags: American Swing