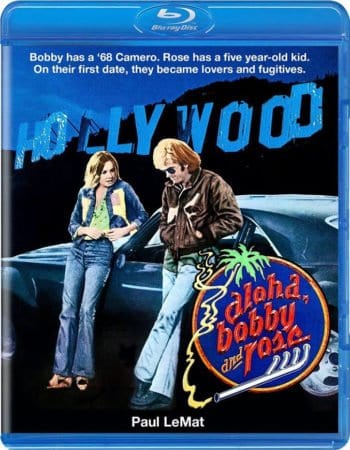 “Aloha, Bobby and Rose” is this weird Southern crime flick with a bumping soundtrack. But, it’s based on a starting point that undermines the plot. Our two heroes are on the run for a crime they didn’t commit. But, the crime wasn’t a crime so much as an accident. They were the only people in the store, but they automatically assumed they’d get railroaded by the local authorities.

There’s a lot of car theft in the movie and you’ve got Paul Le Mat making the most of his post American Graffiti fame. William Fraker’s cinematography places this movie so deep in the mid 70s that I smeared vaseline over my own screen to go even more retro. Ultimately, the movie is undone by its own demands. The post Easy Rider buzz was running thin, as America was starting to tire of loser kids trying to find the real America.

By the post Watergate era, the real America was beaten and left for dead. Get cyncial, movie that came out 43 years ago. Until then, I’ll enjoy Aloha, Bobby and Rose for being a hidden treasure. Check out the movie when you have a chance.