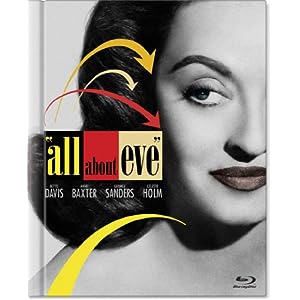 Best Music (Scoring of a Dramatic or Comedy Picture)

Writer-director Joseph L. Mankiewicz’s sharp script anchors this story about New York City theater life, with Bette Davis playing an aging Broadway diva who employs a starstruck fan (Anne Baxter) as her assistant, only to learn the woman is a conniving upstart.

All About Eve opens on the Theatrical world getting ready for the Sarah Siddons Award. With some clever moves of the camera were introduced to lead actress Eve Harrington (Anne Baxter), theater critic Addison DeWitt (George Sanders), Karen Richards (Celeste Holm) and playwright Lloyd Richards (Hugh Marlowe). We move from table to table, as Addison explains in voiceover why everyone is at the Awards and who they are. Thats when were introduced to Margo Channing (Bette Davis) and she wants the world to know that she is a star. But, the night is all about Eve.

Eve Harrington is about to become the youngest actress ever to win the Sarah Siddons Award for Best Actress. Shes a humble woman whose devotion to her craft should be admired by all. Its not until Karen Richards begins to tell the audience all about her that we truly get a glimpse at the real woman. Eve started her career as a starstruck fan who just wanted to meet Margo Channing. Eve is enchanted with the stage, while Karen and Margo get into a brief argument. When Eve finally gets to enter Margos dressing room to meet her, she lets everyone know her hard luck story. She started life as a poor girl in Wisconsin and she details her struggle to leave the farm and head to New York.

For the rest of the flick, Eve becomes a sort of tagalong for Margo. Wherever Margo and her lover Bill Sampson (Gary Merrill) go, Eve makes sure to follow. But, Bill starts to pay extra attention to the charming Eve. In addition, Margos own jealous fantasies that Eve is trying to steal her man away leads to a showdown. This spills into Bills birthday party where Margo is starting to go on a drunken romp due to everyones endless admiration of Eve.

What comes next has been played out in a variety films in a variety of more interesting and entertaining scenarios. Unfortunately, this mustve been the best that 1950 had to offer. This barely passes for mediocre episodes of the average show on HBO, but that doesnt mean that Im knocking the flick. Its just that it doesnt offer anything outside of a look at the cattiness of the theater world in the early 50s. Though, thats like saying Beyond the Valley of the Dolls was an accurate look at girl groups in the 60s.

The Blu-Ray comes with the commentaries, isolated score track and featurettes ported over from the Special Edition DVD. You also get the vintage MovieTone News reels that put you in the right mood to relive the film’s initial march to Oscar glory. The A/V Quality is superb with a healthy 50 gig disc that allows the transfer to breathe without bungling the DTS-HD 5.1 master audio track. In the end, I’d recommend a purchase for all true cinemaphiles.