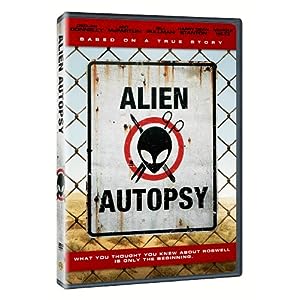 In 1995, mysterious top-secret black-and-white footage, supposedly filmed during the 1947 Roswell incident, was broadcast around the world. It showed the autopsy of an alien lifeform. The men responsible for the discovery of the footage, buddies Ray (Declan Donnelly) and Gary (Ant McPartlin), are thrown into intense media scrutiny. But the guys have an even bigger secret. And its not very pretty. Based on true events, Alien Autopsy is the alternately bizarre and frequently quirky story of the two unlikely lads from London who become icons in UFOlogy with a discovery that stunned millions whove long searched for evidence of extraterrestrial life. Bill Pullman (Spaceballs, Independence Day) and Harry Dean Stanton (Alien) join a cast of intriguing characters in the tale of the mystery that, in one sense at least, was truly out of this world.

McPartlin and Donnelly, better known in the UK as Ant and Dec have been a popular double act on television for well over fifteen years. They began life presenting, moved into acting, had a brief flirtation with the music business and then went back to presenting. They proved to be something of a revolution in broadcasting, drawing adult viewers to what were essentially children’s shows with such parent-angering games as Beat the Barber, where the losing child had their hair completely shaved off in front of a studio audience.

The premise of the film is that whilst on a business trip in America collecting Elvis memorabilia Ray comes across the footage detailing an autopsy in Roswell, 1947. He buys this footage with plans to make money from it back in the UK. However once the film has been exposed to air it rapidly deteriorates rendering the film useless. And that should have been that, except Ray had borrowed the money from a psychopathic gangster with a sideline in standing naked in crop circles, who will kill him if he doesn’t come back with the promised footage. And so all kinds of madcap shenanigans ensue as the pair recreate the film and fool both the gangster and the world.

This is a low-key comedy and even most of the gags have been done better and funnier in other films. It doesn’t matter, though, because the lead actors are likable and charming and the movie doesn’t try to hard. Even at the end, when you’re prepared for anything to happen, and if you’re in the spirit of the movie, you actually find yourself on the edge of your seat. This movie doesn’t end in a big bang. Your world won’t be turned upside down. You won’t look at existence any deeper than you do now.

The DVD comes with additional scenes, outtakes and a director’s commentary. There’s a few featurettes that try to probe the true nature of the film, but it doesn’t feel long enough. The A/V Quality is stronger than I expected for a British film from the mid-1990s. Yet, I wish the Dolby track would’ve been a little cleaner for dialogue carried by heavy accents.