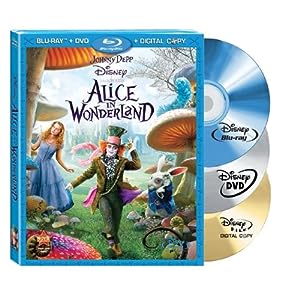 19-year-old Alice returns to the magical world from her childhood adventure, where she reunites with her old friends and learns of her true destiny: to end the Red Queen’s reign of terror.

Alice Kingsley (Mia Wasikowska) is, unbeknownst to her, on her way to her engagement party. Turns out this is the famous Alice who 13 years earlier ventured in to Wonderland. Surely there is a creative reason to pull her back into the zany world. Nope, she merely felt the urge to chase a rabbit who himself was seeking to fulfill a prophecy. And so, Alice in roped back into the world of fantasy/absurdity. Feeling pressured, she runs off, following a white rabbit, which leads her to Wonderland, a place she only vaguely remembers from childhood. There, she meets past familiar faces as the Mad Hatter (Johnny Depp), the Blue Caterpillar (Alan Rickman), the Cheshire Cat (Stephen Fry), and eventually the Red Queen (Helena Bonham Carter), who has been terrorizing the land with her harsh rule and beheading of heads. Alice finds out that her destiny is to end the Red Queen’s rule by slaying the queen’s dragon, Jabberwocky, as written in the prophesy. Along the way she meets up with all sorts of colorful characters.

Tim Burton’s version of the Wonderland’s environments are gorgeous, imaginatively created, lots of colorful details, and breathes life. The castles are sleek and intricately designed. The creatures are generally live versions (CG) of the Disney’s previous animated version, and they’re even more odder and fun to look at. I particularly loved the portrayal of the Chesire Cat in this film, and the way he snakes through midair like water feels very natural, although it wouldn’t feel so natural in real life. Only complaint I may have in terms of visuals would probably be where we see CG versions of natural creatures like dogs–they’re not particularly stylized so their CG-ness can be more noticeable.

The White Queen (Anne Hathaway) was in position to be the most complex element of the film. I suppose her role is to assume power in the event that her sister is dethroned. For a character who talks a big game of peace, she sure does mix together an abhorrent potion to return Alice to normal size. Despite repeatedly saying she represents good, I didn’t see any evidence. Toes would have been crushed I’m sure, but the vibe from Anne’s portrayal suggested that she wanted to be the calculating nemesis.

We’re left exploring a CGI wonderland that seems to be without a great deal of wonder. The book revels in its bizarre environs, absurd dialogue and whimsical characters. This film grounds them, drains them of that mystery and leaves us with a colourful but forgettable retread. It seems intent on driving us to a narrative conclusion that few people will have had much stake in through its running time, simply because we’re not giving much to support.

The Blu-Ray is loaded with featurettes that cover everything from the original story to the creation of the Tea Party. There’s also a DVD copy with the bonus features that appeared on that disc’s supplemental material. The digital copy is included as the third disc, but it doesn’t matter. What matters is all of the material that takes you from greenscreen and further into Burton’s imagination. The A/V Quality is reference quality, as the transfer blends 1080p clarity with new eye-popping material. It’s not in 3-D, but hopefully the DTS-HD master audio track will make you smile. I’d recommend it for a buy.