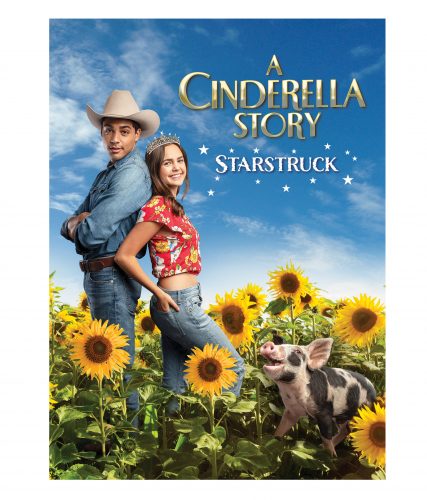 Lights, Camera, Action! Warner Bros. Home Entertainment will have you singing and dancing in your seat with the release of A Cinderella Story: Starstuck, on Digital beginning June 29th, and on DVD on July 13th. The all-new musical film set in Dreary, Idaho stars Bailee Madison (A Week Away) as our modern-day heroine Finley Tremain and Michael Evans Behling (All American) as her charming romantic interest, Jackson Stone.

Other featured actors include April Telek (Chris Watts: Confession of a Killer) as the cruel stepmother, Valerian, and step-siblings Saffron and Kale, played respectively by Lillian Doucet-Roche (A Cinderella Story: Christmas Wish) and Richard Harmon (The 100). A Cinderella Story: Starstruck will be available on Digital for $14.99 SRP ($14.99 in Canada), and on DVD for $19.98 SRP ($24.98 in Canada).

A Cinderella Story: Starstruck will also be available on Movies Anywhere. Using the free Movies Anywhere app and website, consumers can access all their eligible movies by connecting their Movies Anywhere account with their participating digital retailer accounts. Finley Tremaine, a small-town farm girl, longs to spread her wings and soar as an aspiring performer.

When a Hollywood film crew arrives in her sleepy town, she is determined to land a role in the production and capture the attention of handsome lead actor Jackson Stone. Unfortunately, a botched audition forces her to change course. Now, disguised as cowboy “Huck,” Finley finally gets her big break. But can she keep the charade a secret from everyone, including her evil stepmother and devious step-siblings?

The veteran filmmaker also choreographed the first four films and served as a producer on the past three. Dylan Sellers of Limelight (Palm Springs, The Starling, The Giver, St. Vincent), keeper of the A Cinderella Story franchise, is back for his sixth turn as producer. Trygge Toven (Captain Marvel, Avengers: Infinity War, Trolls) and Toko Nagata (Shaft, The Predator, Pitch Perfect 3) are the music supervisors. Production services were provided by Front Street Pictures Inc.

ABOUT MOVIES ANYWHERE Movies Anywhere is a digital movie platform that enables movie fans to discover, access, and watch their favorite digital movies in one place. Movies Anywhere brings together a library of nearly 7,500 digital movies from Sony Pictures, Twentieth Century Fox Film, The Walt Disney Studios (including Disney, Pixar, Marvel Studios and Lucasfilm), Universal Pictures (including DreamWorks and Illumination Entertainment) and Warner Bros., and will continue to expand the consumer experience as more content providers, digital retailers and platforms are added.

By connecting participating digital retailers that include Amazon Prime Video, FandangoNOW, Google Play, iTunes and Vudu, movie fans can now bring together their digital movie collections (whether purchased or redeemed) in one place and enjoy them from the comfort of their living rooms, and across multiple devices and platforms, including Amazon Fire devices; Android devices and Android TV; Apple TV; Chromecast; iPhone, iPad and iPod touch; Roku® devices and popular browsers.

Movie fans can also redeem digital codes found in eligible Blu-ray and DVD disc packages from participating studios and enjoy them through Movies Anywhere. Movies Anywhere – your movies, together at last.

ABOUT DIGITAL Digital movies or TV episodes allow fans to watch a digital version of their movie or TV show anywhere, on their favorite devices. Digital movies or TV episodes are included with the purchase of specially marked Blu-ray discs. With digital, consumers are able to instantly stream and download movies and TV shows to TVs, computers, tablets and smartphones through retail services. For more information on compatible devices and services go to wb.com/digitalmoviefaq. Consult a digital retailer for details and requirements and for a list of digital-compatible devices.

0 0
Previous ArticleUNDER THE STADIUM LIGHTS – In Select Theaters, on Digital, and On Demand June 4, 2021Next ArticleCharles Bronson Stars in Man with a Camera: The Complete Series: on digital & DVD For the First Time on 5/12