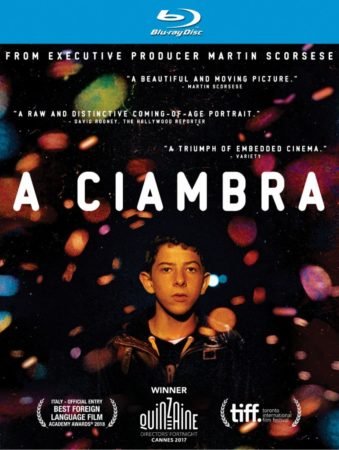 THE CANNES WINNER ABOUT A BOY GROWING UP FAST IN A WORLD OF CRIME
A CIAMBRA
Comes to DVD and Blu-ray on July 10, 2018

Presented by executive producer Martin Scorsese, A CIAMBRA, Italy’s entry for the 2018 Academy Awards, is the electrifying second feature from rising director Jonas Carpignano (Mediterranea). Fourteen-year-old Pio (Pio Amato) wants nothing more than the respect of his older brother, whom he emulates in every way – including his career as a petty criminal. When both his father and brother are arrested, Pio is determined to prove he can step up and be the head of his sprawling Romani family. But a fateful night and a wrenching decision soon test just how ready he is. Steeped in the complex social fabric of Southern Italy – where Italians, Romani and African migrants coexist in uneasy tension – A CIAMBRA is a bracing plunge into a world in which growing up fast is a matter of survival. The Cannes Film Festival award winner packs “a stealthy emotional charge,” said David Rooney of The Hollywood Reporter. Both the Blu-ray and DVD include the making-of documentary “A Ciambra: The Other Side of the Story,” deleted scenes and more.

Tags: A Ciambra, A CIAMBRA Comes to Blu-ray from IFC on 7/10